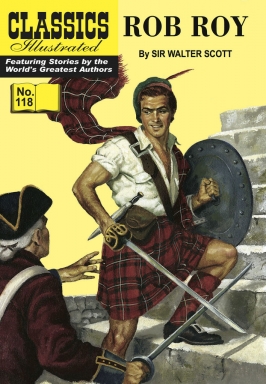 Rob Roy (1817) is a historical novel by Walter Scott. It is narrated by Frank Osbaldistone, the son of an English merchant who travels first to the North of England, and subsequently to the Scottish Highlands, to collect a debt stolen from his father. On the way he encounters the larger-than-life title character, Rob Roy MacGregor. Though Rob Roy is not the lead character (in fact, the narrative does not move to Scotland until halfway through the book), his personality and actions are key to the novel's development.

The book was loosely adapted into a film in 1995, starring Liam Neeson, Tim Roth, and Jessica Lange.

The story takes place just before the Jacobite rising of 1715, with much of Scotland in turmoil.

Frank Osbaldistone, the narrator, quarrels with his father and is sent to stay with an uncle, Sir Hildebrand Osbaldistone, in Northumberland. Frank falls in love with Diana Vernon, Sir Hildebrand's niece, whose father has been forced to go into hiding because of his Jacobite sympathies. Frank's cousin, Rashleigh, steals important documents vital to the honour and economic solvency of Frank's father, William, and Frank pursues Rashleigh to Scotland. Several times his path crosses the mysterious and powerful figure Rob Roy MacGregor, known as Rob Roy, an associate of Sir Hildebrand. There is much confusion as the action shifts to the beautiful mountains and valleys around Loch Lomond. A British army detachment is ambushed and there is bloodshed. The eponymous Rob Roy is badly wounded at the Battle of Glen Shiel in 1719, in which a British army of Scots and English defeat a Jacobite and Spanish expedition that aimed to restore the Stuart monarchy. All of Sir Hildebrand's sons but Rashleigh are killed in the Jacobite rising, and Rashleigh, too meets a bloody end. Following this, Frank inherits Sir Hildebrand's property and marries Diana.

Robert Louis Stevenson loved the novel from childhood, regarding it as the best novel of the greatest of all novelists.

The novel is a brutally realistic depiction of the social conditions in Highland and Lowland Scotland in the early 18th century. Some of the dialogue is in Scots, and the novel includes a glossary of Scottish words.