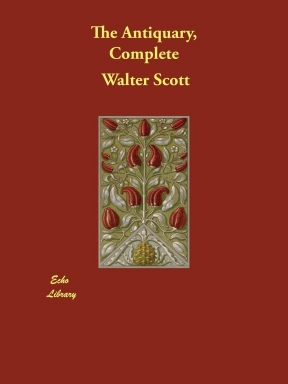 The Antiquary (1816) is a novel by Sir Walter Scott about several characters including an antiquary: an amateur historian, archaeologist and collector of items of dubious antiquity. Although he is the eponymous character, he is not necessarily the hero, as many of the characters around him undergo far more significant journeys or change. Instead, he provides a central figure (and location) for other more exciting characters and events – on which he provides a sardonic commentary. The book is written in the third person so even the narrative does not remain with the antiquary.

This is Scott's gothic novel, redolent with family secrets, stories of hidden treasure and hopeless love, with a mysterious, handsome, young man, benighted aristocracy and a night-time funeral procession to a ruined abbey, no less. But the romance and mystery is counterpoised by some of Scott's more down-to-earth characters, and grittily unromantic events.

Scott wrote in an advertisement to the novel that his purpose in writing it, similar to that of his novels Waverley and Guy Mannering was to document Scottish life and manners of a certain period, in this case the last decade of the 18th century. Scott included a glossary of Scottish terms as an appendix to the novel.

At the opening of the story, Lovel meets Oldbuck while taking a coach from Edinburgh. Oldbuck, interested as he is in antiquities, has with him Gordon's Itinerarium, a book about Roman ruins. The book interests Lovel, to the surprise of Oldbuck and by their shared interest the two become friends. Oldbuck invites Lovel to come to Monkbarns and takes the opportunity of a willing listener to divulge his ancient knowledge. In the process of which, Oldbuck shows Lovel a plot of land he purchased at great personal cost which bears the inscription "A.D.L.L", which Oldbuck takes to mean "Agricola Dicavit Libens Lubens". Edie Ochiltree shows up to dispute the antiquary's history, in one of the more amusing scenes of the story.

Oldbuck decides to introduce Lovel to his good friend, Sir Arthur Wardour. When Sir Arthur arrives, Lovel meets Arthur's daughter, Isabella and the two realize they have seen each other before. Because Lovel is illegitimate, she knows her father would not approve of a marriage between them. When she sees Lovel standing in the road waiting to talk to her, she convinces her father to take the long way home, walking down to the beach. Luckily, Edie Ochiltree, having the insight that someone may be trapped on the beach not knowing that the tide was coming in, finds the Wardours and helps them escape the rising waters. Then, Lovel appears and gets them to relative safety, huddling on the side of a rocky cliff. Finally, Oldbuck arranges a team with a lift system to pull the four up over the cliff to safety.