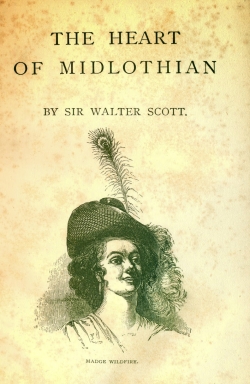 The Heart of Midlothian is the seventh of Sir Walter Scott’s Waverley Novels. It was originally published in four volumes on 25 July 1818, under the title of Tales of My Landlord, 2nd series, and the author was given as "Jedediah Cleishbotham, Schoolmaster and Parish-clerk of Gandercleugh". Although the identity of the author of the Waverley Novels was well known by this time, Scott still chose to write under a pseudonym. The book was released only seven months after the highly successful Rob Roy. Scott was at the time recovering from illness, and wrote at an even more furious pace than usual. When the book was released, it more than matched the popularity of his last novel.

Much of the dialogue is in Lowland Scots, and some editions carry a glossary.

The title of the book refers to the Old Tolbooth Prison in Edinburgh, Scotland, at the time in the heart of the Scottish county of Midlothian. The historical backdrop was the event known as the Porteous Riots. In 1736, a riot broke out in Edinburgh over the execution of two smugglers. The Captain of the City Guards, Captain John Porteous, ordered the soldiers to fire into the crowd, killing several people. Porteous was later killed by a lynch mob who stormed the Old Tolbooth. Scott's telling emphasises the gruesome details of the killing: he is lynched from a dyer's pole, using a rope taken from a local draper's shop. After a short while he is dragged down and stripped of his nightgown and shirt, which is then wrapped around his head before he was hauled up again. However, the mob had not tied his hands and, as he struggled free, they break his arm and shoulder, while another attempts to set light to his naked foot. He is taken down a further time and cruelly beaten before being hung up again, and dies a short while later, just before midnight on 7 September 1736.

The second, and main element of the novel was based on a story Scott claimed to have received in an unsigned letter. It was about a certain Helen Walker who had travelled all the way to London by foot, in order to receive a royal pardon for her sister, who was unjustly charged with infanticide. Scott put Jeanie Deans in the place of Walker, a young woman from a family of highly devout Presbyterians. Jeanie goes to London, partly by foot, hoping to achieve an audience with the Queen through the influence of the Duke of Argyll.