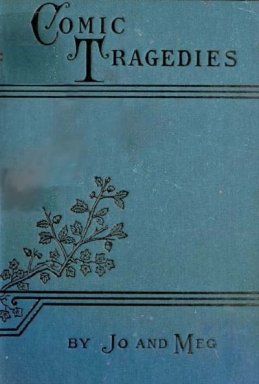 In the good old times, when "Little Women" worked and played together, the big garret was the scene of many dramatic revels. After a long day of teaching, sewing, and "helping mother," the greatest delight of the girls was to transform themselves into queens, knights, and cavaliers of high degree, and ascend into a world of fancy and romance. Cinderella's godmother waved her wand, and the dismal room became a fairy-land. Flowers bloomed, forests arose, music sounded, and lovers exchanged their vows by moonlight. Nothing was too ambitious to attempt; armor, gondolas, harps, towers, and palaces grew as if by magic, and wonderful scenes of valor and devotion were enacted before admiring audiences.

Jo, of course, played the villains, ghosts, bandits, and disdainful queens; for her tragedy-loving soul delighted in the lurid parts, and no drama was perfect in her eyes without a touch of the demonic or supernatural. Meg loved the sentimental rôles, the tender maiden with the airy robes and flowing locks, who made impossible sacrifices for ideal lovers, or the cavalier, singing soft serenades and performing lofty acts of gallantry and prowess. Amy was the fairy sprite, while Beth enacted the page or messenger when the scene required their aid.

But the most surprising part of the performance was the length of the cast and the size of the company; for Jo and Meg usually acted the whole play, each often assuming five or six characters, and with rapid change of dress becoming, in one scene, a witch, a soldier, a beauteous lady, and a haughty noble. This peculiar arrangement accounts for many queer devices, and the somewhat singular fact that each scene offers but two actors, who vanish and reappear at most inopportune moments, and in a great variety of costume. Long speeches were introduced to allow a ruffian to become a priest, or a lovely damsel to disguise herself in the garb of a sorceress; while great skill was required to preserve the illusion, and astonish the audience by these wonderful transformations.

The young amateur of to-day, who can easily call to her aid all the arts of the costumer and scene-maker, will find it hard to understand the difficulties of this little company; for not only did they compose their plays, but they were also their own carpenters, scene-painters, property-men, dress-makers, and managers. In place of a well-appointed stage, with the brilliant lights and inspiring accessories of a mimic theatre, the "Little Women" had a gloomy garret or empty barn, and were obliged to exercise all their ingenuity to present the scenes of their ambitious dramas.

But it is surprising what fine effects can be produced with old sheets, bright draperies, and a judicious arrangement of lights, garlands, and picturesque properties; and Jo's dramatic taste made her an admirable stage-manager. Meg was especially handy with saw and hammer, and acted as stage-carpenter,—building balconies, thrones, boats, and towers after peculiar designs of her own. Bureaus, tables, and chairs, piled aloft and arched with dark shawls, made dungeon walls and witch's cave, or formed a background for haunted forest and lonely glen. Screens of white cloth furnished canvas on which little Amy's skilful hand depicted palace halls, or romantic scene for lovers' tryst; and Beth's deft fingers were most apt in constructing properties for stage adornment, and transforming the frailest material into dazzling raiment. For the costumes were a serious consideration. No money could be spared from the slender purse to supply the wardrobes of these aspiring actors, and many were the devices to clothe the little company.

Thus a robe in one scene became a cloak in the next, and the drapery of a couch in the third; while a bit of lace served as mantle, veil, or turban, as best suited the turn of the play. Hats covered with old velvet, and adorned with feathers plucked from the duster, made most effective headgear for gay cavalier or tragic villain. From colored cotton were manufactured fine Greek tunics and flowing trains; and remarkable court costumes were evolved from an old sofa-covering, which had seen better days, and boasted a little gold thread and embroidery.

Stars of tin, sewed upon dark cambric, made a suit of shining armor. Sandals were cut from old boots. Strips of wood and silver paper were fashioned into daggers, swords, and spears, while from cardboard were created helmets, harps, guitars, and antique lamps, that were considered masterpieces of stage art.

Everything available was pressed into service; colored paper, odds and ends of ribbon, even tin cans and their bright wrappings were treasures to the young actors, and all reappeared as splendid properties.

At first a store of red curtains, some faded brocades, and ancient shawls comprised the stage wardrobe; but as the fame of the performances spread abroad, contributions were made to the little stock, and the girls became the proud possessors of a velvet robe, a plumed hat adorned with silver, long yellow boots, and a quantity of mock pearls and tinsel ornaments.

Such wealth determined them to write a play which should surpass all former efforts, give Jo a chance to stalk haughtily upon the stage in the magnificent boots, and Meg to appear in gorgeous train and diadem of jewels.

"The Witch's Curse" was the result, and it was produced with astounding effect, quite paralyzing the audience by its splendid gloom. Jo called it the "lurid drama," and always considered it her masterpiece. But it cost hours of thought and labor; for to construct a dungeon, a haunted chamber, a cavern, and a lonely forest taxed to the uttermost the ingenuity of the actors. To introduce into one short scene a bandit, two cavaliers, a witch, and a fairy spirit—all enacted by two people—required some skill, and lightning change of costume. To call up the ghostly visions and mysterious voices which should appall the guilty Count Rodolpho, was a task of no small difficulty. But inspired by the desire to outshine themselves, the children accomplished a play full of revenge, jealousy, murder, and sorcery, of all which indeed they knew nothing but the name.

Hitherto their dramas had been of the most sentimental description, given to the portrayal of woman's devotion, filial affection, heroism, and self-sacrifice. Indeed, these "Comic Tragedies" with their highflown romance and fantastic ideas of love and honor, are most characteristic of the young girls whose lives were singularly free from the experiences of many maidens of their age.

Of the world they knew nothing; lovers were ideal beings, clothed with all the beauty of their innocent imaginations. Love was a blissful dream; constancy, truth, courage, and virtue quite every-day affairs of life. Their few novels furnished the romantic element; the favorite fairy-tales gave them material for the supernatural; and their strong dramatic taste enabled them to infuse both fire and pathos into their absurd situations.

Jo revelled in catastrophe, and the darker scenes were her delight; but she usually required Meg to "do the love-part," which she considered quite beneath her pen. Thus their productions were a queer mixture of sentiment and adventure, with entire disregard of such matters as grammar, history, and geography,—all of which were deemed of no importance by these aspiring dramatists.

From the little stage library, still extant, the following plays have been selected as fair examples of the work of these children of sixteen and seventeen. With some slight changes and omissions, they remain as written more than forty years ago by Meg and Jo, so dear to the hearts of many other "Little Women."

Anna Bronson Alcott Pratt (16/3/1831 – 17/7/1893) was the elder sister of American novelist Louisa May Alcott. She was the basis for the character Margaret "Meg" of Little Women (1868), her sister's classic, semi-autobiographical novel. The eldest of the four Alcott sisters (being herself, Louisa, Lizzie, and May), Anna is remembered as a dutiful, self-sacrificing and loving sister, wife and mother who conformed to the mold of Victorian womanhood more easily than did her sisters. To her family members, she served as an emotional shelter.