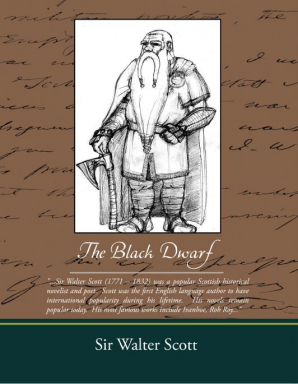 Walter Scott's novel The Black Dwarf was part of his Tales of My Landlord, 1st series, published along with Old Mortality on 2 December 1816 by William Blackwood, Edinburgh, and John Murray, London. Originally the four volumes of the series were to tell separate stories, but Old Mortality came to occupy three of them.

As Hobbie Elliot was returning over a wild moor from a day's sport, thinking of the legends he had heard of its supernatural occupants after nightfall, he was overtaken by Patrick Earnscliff, whose father had been killed in a quarrel with the laird of Ellislaw, Richard Vere. The moon suddenly revealed the figure of a human dwarf, who, on being spoken to, refused their offers of assistance, and bid them begone. Having invited Earnscliff to sup with his womenfolks, and pass the night at his farm, Hobbie accompanied him next morning to confront the strange being by daylight; and having assisted him in collecting stones for constructing a hut, they supplied him with food and other necessaries. In a short time he had completed his dwelling, and became known to the neighbours, for whose ailments he prescribed, as Elshender the Recluse.

Being visited by Isabel Vere and two of her friends, he told their fortunes, and he gave her a rose, with strict injunctions to bring it to him in her hour of adversity. As they rode homewards, their conversation implied that she loved young Patrick Earnscliff, but that Mr Vere intended her to marry Sir Frederick Langley. Another of the dwarf's visitors was Willie Graeme of Westburnflat, on his way to avenge an affront he had received from Hobbie Elliot, whose dog the next day killed one of the dwarf's goats, for which he warned him that retribution was at hand.