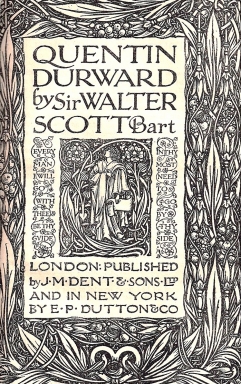 Quentin Durward is a historical novel by Walter Scott, first published in 1823. The story concerns a Scottish archer in the service of the French King Louis XI (1423–1483).

The age of feudalism and chivalry was passing away, and the King of France was inciting the wealthy citizens of Flanders against his own rebellious vassal the Duke of Burgundy. Quentin Durward had come to Tours, where his uncle was one of the Scottish body guard maintained by Louis XI, to seek military service, and was invited by the king, disguised as a merchant, to breakfast at the inn, and supplied by him with money. Having narrowly escaped being hanged by the provost-marshal for cutting down Zamet, whom he found suspended to a tree, he was enlisted by Lord Crawford, and learned the history of Jacqueline. In the presence-chamber he was recognised by Louis, and the royal party were preparing for a hunting excursion, when the Count of Crèvecœur arrived with a peremptory demand for the instant surrender of the duke's ward, the Countess of Croye, who had fled from Burgundy with her aunt to escape a forced marriage; and proclaimed that his master renounced his allegiance to the crown of France. In the chase which followed Durward saved the king's life from a boar, for which service Louis, after consulting with his barber, entrusted him with the duty of conducting the Countess and Lady Hameline, ostensibly to the protection of the Bishop of Liege, but really that they might fall into the hands of William de la Marck. After proceeding some distance they were overtaken by Dunois and the Duke of Orléans, who would have seized the countess, but were prevented by Lord Crawford, who arrived in pursuit and made prisoners of them. Then Hayraddin came riding after them, and under his guidance they journeyed for nearly a week, when Quentin discovered that the Bohemian was in league with De la Marck. He accordingly altered their route, and they reached the bishop's castle in safety.

A few days afterwards, however, it was assaulted by the citizens, and Hayraddin having effected Lady Hameline's escape with Marthon, Quentin rushed back to save the countess, and, at Gieslaer's suggestion, Pavilion passed them as his daughter and her sweetheart into the great hall where the outlaw, who was known as the Boar of Ardennes, was feasting with the rioters. The bishop, who was also governor of the city, was then dragged in, and, having denounced his captor, was murdered by a stroke of Nikkel Blok's cleaver. There was a shout for vengeance, but De la Marck summoned his soldiers, upon which Quentin held a dirk at the throat of his son Carl, and exhorted the citizens to return to their homes. With the syndic's help Lady Isabella and her protector reached Charleroi, where she was placed in a convent, while he carried the news to the Duke of Burgundy, at whose court Louis, with a small retinue, was a guest. Charles, in a furious rage, accused the king of being privy to the sacrilege, and caused him to be treated as a prisoner.