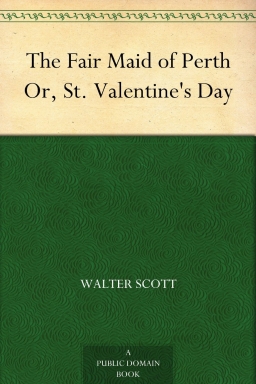 The Fair Maid of Perth Or, St. Valentine's Day is a novel by Sir Walter Scott. Inspired by the strange story of the Battle of the North Inch, it is set in Perth and other parts of Scotland around 1400.

The book had been intended to include two other stories in the same volume, "My Aunt Margaret's Mirror" and "Death of the Laird's Jock", which was to have been titled St. Valentine's Eve.

The armourer, Henry Gow, had excited the jealousy of the apprentice Conachar by spending the evening with the glover and his daughter and was returning to their house at dawn, that he might be the first person she saw on St Valentine's morning, when he encountered a party of courtiers in the act of placing a ladder against her window. Having cut off the hand of one, and seized another, who, however, managed to escape, he left the neighbours to pursue the rest, and was saluted by Catharine as her lover. The citizens waited on the provost, who, having heard their grievance, issued a challenge of defiance to the offenders.

Meanwhile the King, who occupied apartments in the convent, having confessed to the prior, was consulting with his brother, when the Earl of March arrived to intimate his withdrawal to the English Border, followed into the courtyard by Louise, and afterwards by the Duke of Rothesay, whose dalliance with the maiden was interrupted by the Earl of Douglas ordering his followers to seize and scourge her. Henry Gow, however, was at hand, and the prince, having committed her to his protection, attended his father's council, at which it was determined that the hostile Clans Chattan and Quhele ("Kay") should be invited to settle their feud by a combat between an equal number of their bravest men in the royal presence, and a commission was issued for the suppression of heresy. The old monarch, having learnt that his son was one of those who had attempted to force their way into the glover's house, insisted that he should dismiss his Master of the Horse, who encouraged all his follies; and while Catharine, who had listened to the Lollard teaching of Father Clement, was being urged by him to favour the secret suit of the Prince, her other lover, Conachar, who had rejoined his clan, appeared to carry off her councillor from arrest as an apostate reformer.