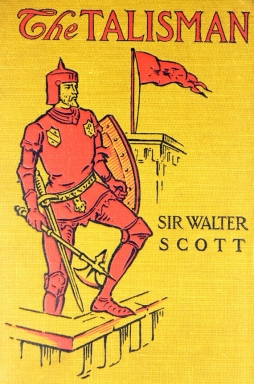 The Talisman is a novel by Sir Walter Scott. It was published in 1825 as the second of his Tales of the Crusaders, the first being The Betrothed.

The Talisman takes place at the end of the Third Crusade, mostly in the camp of the Crusaders in Palestine. Scheming and partisan politics, as well as the illness of King Richard the Lionheart, are placing the Crusade in danger. The main characters are the Scottish knight Kenneth, a fictional version of David of Scotland, Earl of Huntingdon, who returned from the third Crusade in 1190; Richard the Lionheart; Saladin; and Edith Plantagenet, a relative of Richard.

During a truce between the Christian armies taking part in the third Crusade, and the infidel forces under Sultan Saladin, Sir Kenneth, on his way to Syria, encountered a Saracen Emir, whom he unhorsed, and they then rode together, discoursing on love and necromancy, towards the cave of the hermit Theodoric of Engaddi. This hermit was in correspondence with the pope, and the knight was charged to communicate secret information. Having provided the travellers with refreshment, the anchorite, as soon as the Saracen slept, conducted his companion to a chapel, where he witnessed a procession, and was recognised by the Lady Edith, to whom he had devoted his heart and sword. He was then startled by the sudden appearance of the dwarfs, and, having reached his couch again, watched the hermit scourging himself until he fell asleep.