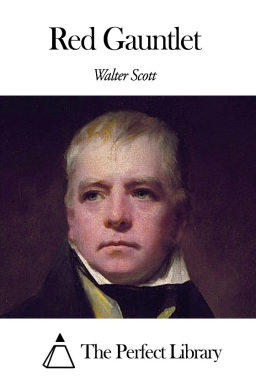 Redgauntlet (1824) is a historical novel by Sir Walter Scott, set in Dumfries, Scotland in 1765, and described by Magnus Magnusson (a point first made by Andrew Lang) as "in a sense, the most autobiographical of Scott's novels." It describes the beginnings of a fictional third Jacobite Rebellion, and includes "Wandering Willie's Tale", a famous short story which frequently appears in anthologies.

Darsie had been Alan Fairford's favourite schoolfellow, and, to please his son, Mr Fairford had consented that Darsie, who received an ample allowance on the understanding that he was to make no inquiries respecting his family until he completed his twenty-fifth year, should live with them. Alan was studying for the law, but his companion had started for his first country ramble, and the story commences with a long correspondence between them. As he returned from fishing in the Solway Firth, with Benjie as his instructor, Darsie was overtaken by the tide, and carried by Mr Herries, dressed as a fisherman, on horseback to a cottage, where his niece Lilias said grace at supper-time; and next morning he was placed under the guidance of Joshua Geddes. The Quaker, who was part owner of some fishing nets in the river, invited him to spend a few days at his house; and while there he heard from Alan that a young lady had called to warn him that his friend was in considerable danger, and to urge that he should at once return to Edinburgh. A letter, however, from old Mr Fairford determined him not to do so; and having made acquaintance with the blind fiddler, who told him a tale of the Redgauntlet family, Darsie went with him to a fishers' merry-making, where he danced with Lilias, who reproached him for leading an idle life, and begged him to leave the neighbourhood.