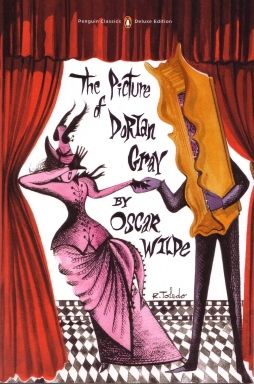 The Picture of Dorian Gray is an 1891 philosophical novel by Irish writer and playwright Oscar Wilde. It was first published as aserial story in the July 1890 issue of Lippincott's Monthly Magazine. As submitted by Wilde to the magazine, the editors feared the story was indecent, and deleted five hundred words before publication - without Wilde’s knowledge. Despite that censorship, The Picture of Dorian Gray offended the moral sensibilities of British book reviewers, some of whom said that Oscar Wilde merited prosecution for violating the laws guarding the public morality. In response, Wilde aggressively defended his novel and art in correspondence with the British press.

Wilde revised and expanded the magazine edition of The Picture of Dorian Gray (1890) for publication as a novel; the book edition (1891) featured an aphoristic preface — an apologia about the art of the novel and the reader. The content, style, and presentation of the preface made it famous in its own literary right, as social and cultural criticism. In April 1891, the editorial house Ward, Lock and Company published the revised version of The Picture of Dorian Gray.

The Picture of Dorian Gray begins on a beautiful summer day in Victorian era England, where Lord Henry Wotton, an opinionated man, is observing the sensitive artist Basil Hallward painting the portrait of Dorian Gray, their host, and the handsome young man who is Basil's ultimate muse. After hearing Lord Henry's hedonistic worldview, Dorian begins to think that beauty is the only aspect of life worth pursuing, and wishes that Basil's portrait of him would age in his stead.

Under the hedonist influence of Lord Henry, Dorian fully explores his sensuality. He discovers the actress Sibyl Vane, who performs Shakespeare plays in a dingy, working-class theatre. Dorian approaches and courts her, and soon proposes marriage. The enamoured Sibyl calls him "Prince Charming", and swoons with the happiness of being loved, but her protective brother, James, a sailor, warns that if "Prince Charming" harms her, he will kill Dorian Gray.

Dorian invites Basil and Lord Henry to see Sibyl perform in Romeo and Juliet. Sibyl, whose only knowledge of love was love of the theatre, foregoes her acting career for the experience of true love with Dorian Gray. Disheartened at her quitting the stage, Dorian rejects Sibyl, telling her that acting was her beauty; without that, she no longer interests him. On returning home, Dorian notices that the portrait has changed; his wish has been realised, and the man in the portrait bears a subtle sneer of cruelty.