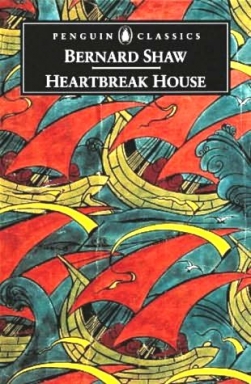 Ellie Dunn, her father, and her fiancé are invited to one of Hesione Hushabye’s infamous dinner parties, to be held at the house of her father, the eccentric Captain Shotover, an inventor in his late 80s who is trying to create a "psychic ray" that will destroy dynamite. The house is built in the shape of the stern of a ship. Lady Utterword, Shotover's other daughter, arrives from Australia, but he pretends not to recognise her. Hesione says they are running out of money. Shotover needs to invent a weapon of mass destruction. His last invention, a lifeboat, did not bring in much cash. Ellie intends to marry businessman Boss Mangan, but she really loves a man she met in the National Gallery. Unfortunately, her fiancé is a ruthless scoundrel, her father's a bumbling prig, and it turns out that the man she's in love with is Hector, Hesione's husband, who spends his time telling romantic lies to women. Marriage to Mangan will be the sensible choice.

A burglar is captured. They say they do not want to prosecute him, but he insists he will turn himself in unless they pay him not to. It turns out that the burglar is one of Shotover's old crewmen. He confesses that he is not a real burglar. He deliberately gets himself captured to get charitable assistance from his victims. Shotover laments that the younger generation have lost their romance. Ellie suggests that she should marry Shotover, but he says he's already married to a black Jamaican wife, though it's possible she's now dead.