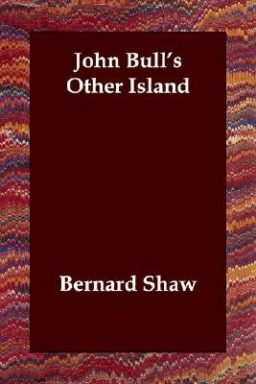 John Bull's Other Island is a comedy about Ireland, written by George Bernard Shaw in 1904. Shaw himself was born in Dublin, yet this is one of only two plays of his where he thematically returned to his homeland, the other being O'Flaherty V.C.. The play was highly successful in its day, but is rarely revived, probably because of so much of the dialogue is specific to the politics of the day.

The play deals with Larry Doyle, originally from Ireland, but who has turned his back on his heritage to fit in with the English and Tom Broadbent, his English (and very Machiavellian) business partner. They are civil engineers who run a firm in London. They go to Roscullen, where Doyle was born, to develop some land.

Doyle has no illusions about Ireland while Broadbent is taken with the romance of the place. Broadbent, a lively man who seemingly is not always aware of the impression he makes, becomes a favourite of the people. Before the play is over, it is clear he will marry Nora Reilly, the woman waiting for Doyle (who is more than happy to let her go) and become the area's candidate for Parliament after Doyle refuses to stand, but has also 'called in' all his loans given "so easily" to the locals against their homes and intends (as he had planned all along) to make the village into an amusement park.