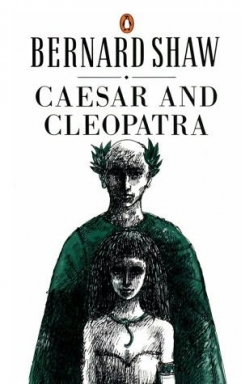 The play has a prologue and an "Alternative to the Prologue". The prologue consists of the Egyptian god Ra addressing the audience directly, as if he could see them in the theater (i.e., breaking the fourth wall). He says that Pompey represents the old Rome and Caesar represents the new Rome. The gods favored Caesar, according to Ra, because he "lived the life they had given him boldly". Ra recounts the conflict between Caesar and Pompey, their battle at Pharsalia, and Pompey's eventual assassination in Egypt at the hands of Lucius Septimius.

In "An Alternative to the Prologue", the captain of Cleopatra's guard is warned that Caesar has landed and is invading Egypt. Cleopatra has been driven into Syria by her brother, Ptolemy, with whom she is vying for the Egyptian throne. The messenger warns that Caesar's conquest is inevitable and irresistible. A Nubian watchman flees to Cleopatra's palace and warns those inside that Caesar and his armies are less than an hour away. The guards, knowing of Caesar's weakness for women, plan to persuade him to proclaim Cleopatra—who may be controllable—Egypt's ruler instead of Ptolemy. They try to locate her, but are told by Cleopatra's nurse, Ftatateeta, that she has run away.