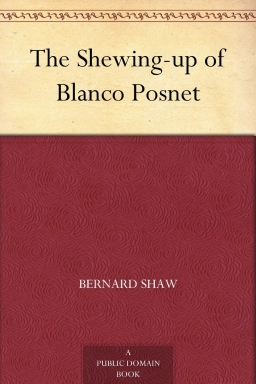 The Shewing-Up of Blanco Posnet: A Sermon in Crude Melodrama is a one-act play by George Bernard Shaw, first produced in in 1909. Shaw describes the play as a religious tract in dramatic form.

In 1909 Shaw jousted with governmental censorship, as personified by The Examiner Of Plays, an agency acting under the auspices of the Lord Chamberlain. The outcome, unsatisfactory to Shaw, is reviewed minutely in the Preface to this play, which had been refused a license to perform because it dealt openly with prostitution.

The play is set in the Old American West. Blanco Posnet, the protagonist is wrongfully accused of horse-theft and sentenced to be hanged. By great good-fortune he is rescued by the testimony of a female witness, Feemy-the local harlot-for whom he has uncharacteristically performed an act of charity. His exoneration is spiritually transforming: His status changes abruptly from pariah to pillar of the community. He does not marry Feemy, but shakes hands with her before they part.