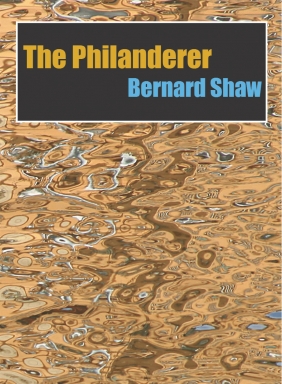 The Philanderer is a play by George Bernard Shaw.

It was written in 1893 but the strict British Censorship laws at the time meant that it was not produced on stage until 1902.

It is one of the three plays Shaw published as Plays Unpleasant in 1898, alongside Widowers' Houses and Mrs Warren's Profession. The volume was written to raise awareness of social problems and criticize capitalist behaviour. The influence of Naturalist playwrights is evident by Shaw's constant reference to Ibsen in the play. The Naturalist theatre movement was a reaction to Melodrama, the Victorian theatre tradition of the time.

Shaw wrote two endings for this play; the first ending, with divorce as its main theme, was discarded on the advice of a friend, the second ending resulting in a more conventional marriage. It is the latter that is usually performed or published, though the former is the more in keeping with Shaw's tendencies to criticize contemporary society.

“A lady and gentleman are making love to one another in the drawing room of a flat in Ashley Gardens in the Victoria district of London.”

The lady is a young widow, Grace Tranfield, in love with the man, Leonard Charteris, who is the ‘philanderer’ of the title. Grace is shocked and disconcerted to find that Charteris, on his own light‐hearted admission, has been in a similar position with Julia Craven and others. The affair with Julia, in fact, has never been broken off. He maintains that it is not his fault that half the women he speaks to fall in love with him; and he is in full flight of cajolery when Julia Craven herself erupts on to the scene, attacks Grace, and announces her intention of staying until Charteris has given her up.

Charteris gets Grace out of the room and unsuccessfully reminds Julia of her supposedly advanced views on marriage. She changes from belligerence to pleading tears, without effect, and, to the consternation of both, the fathers of Grace and Julia enter together. Colonel Craven is suffering from a liver complaint, and much to Charteris’ impatience "has fully made up his mind not to survive next Easter", just to oblige the doctors. Cuthbertson, Grace’s father, is a dramatic critic and theatrically shocked to discover something of the Charteris‐Grace‐Julia triangle; but Charteris explains it is Grace whom he wants to marry.

The scene changes to the Ibsen Club, of which most of the characters are members. A fashionable physician, Dr. Paramore, says he has made a discovery concerning Col. Craven’s fatal complaint, but horrifies Craven’s younger daughter Sylvia by his practice of vivisection. Craven turns up at Cuthbertson’s invitation, and Charteris outrages both men by admitting he had lied to them last night: the truth is, both young women want to marry him, but he does not want to marry either.

Vera; Or, The Nihilists