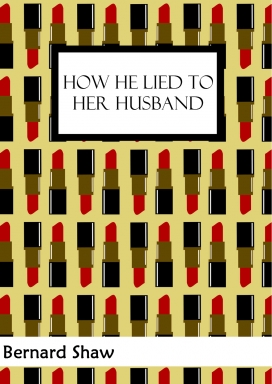 How He Lied to Her Husband is a one-act comedy play by George Bernard Shaw, who wrote it, at the request of actor Arnold Daly, over a period of four days while he was vacationing in Scotland in 1904. In its preface he described it as "a sample of what can be done with even the most hackneyed stage framework by filling it in with an observed touch of actual humanity instead of with doctrinaire romanticism." The play has often been interpreted as a kind of satirical commentary on Shaw's own highly successful earlier play Candida (which one of the characters gets tickets to see).

It was first performed by Daly in New York as a curtain raiser for The Man of Destiny. The original 1905 London cast were Harley Granville-Barker as Henry Apjohn, A. G. Poulton as Teddy Bompas, and Gertrude Kingston as Aurora Bompas.

The three-character play is set in the drawing room of a flat located on Cromwell Road in London. Shaw describes Henry Apjohn as "a very beautiful youth, moving as in a dream, walking as on air," while Aurora Bompas has "an air of being a young and beautiful woman but as a matter of hard fact, she is, dress and pretensions apart, a very ordinary South Kensington female of about 37, hopelessly inferior in physical and spiritual distinction to the beautiful youth." The third character is Aurora's husband Teddy, "a robust, thicknecked, well groomed city man, with a strong chin but a blithering eye and credulous mouth."

Aurora is distressed because she has misplaced some poems, in which she is identified by name, written for her with declarations of love by the impetuous Henry. She suspects her sister-in-law Georgina stole them from her workbox and is concerned she will read them to Aurora's husband Teddy.