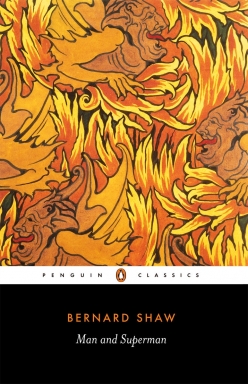 Man and Superman is a four-act drama written by George Bernard Shaw in 1903. The series was written in response to calls for Shaw to write a play based on the Don Juantheme. Man and Superman opened at The Royal Court Theatre in London on 23 May 1905, but omitted the 3rd Act. A part of the act, Don Juan in Hell (Act 3, Scene 2), was performed when the drama was staged on 4 June 1907 at the Royal Court. The play was not performed in its entirety until 1915, when the Travelling Repertory Company played it at the Lyceum Theatre, Edinburgh.

Mr. Whitefield has recently died, and his will indicates that his daughter, Ann should be left in the care of two men, Roebuck Ramsden and Jack Tanner. Ramsden, a venerable old man, distrusts Jack Tanner, an eloquent man with revolutionary ideas. In spite of what Ramsden says, Ann accepts Tanner as a guardian, and she defies Tanner's revolutionary beliefs with her own beliefs. Tanner's dedication to anarchy is unable to disarm Ann's charm, and she ultimately persuades him to marry her. Eventually, Ann chooses Tanner over her more persistent suitor, a young man named Octavius Robinson.