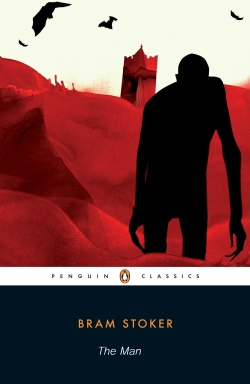 The Man is a romance novel by Bram Stoker (the author of Dracula), written in 1905.
The Man has also been published under the name The Gates of Life.

The novel begins with a "Fore-glimpse" or preface, where the two main characters Miss Stephen Norman and Harold An Wolf are sitting in the graveyard of their town's church, eavesdropping on the conversation of two little girls below them, Marjorie and Susan. Marjorie declares, "I would rather be an angel than a God!" and explains that she would rather obey orders than give them. Susan disagrees, and says that she would rather be a God so that she could be at "the top of everything" and give orders to the angels. Upon listening to their conversation, Harold tells Stephen that he agrees with Marjorie's point of view, whereas Stephen takes Susan's side. Harold tells Stephen that a woman cannot be a God because she is not just enough, and the two have a slight argument about it, and the two part ways. This fore-glimpse assigns the trait of dominance to Stephen, and submission to Harold.

The story begins with Squire Stephen Norman, who was the Lord of the manor who presided over the feudal society of Normanstand. Squire Norman marries Margaret Rowly, the younger sister of his dear friend Squire Rowly, who was the squire of the neighboring town. Wanting to produce an heir to recede him as the Squire of Normanstand, Squire Norman and Margaret decide to have a baby. While Margaret is expecting, Squire Norman eagerly anticipates the birth of his son. However, the baby ends up being a girl. Margaret has complications during childbirth and the Doctor tells Squire Norman that his wife is going to pass away at any moment. At Margaret's deathbed, Squire Norman tells her that he will love his daughter as much as he would have loved a son. In her final words, Margaret insists to Squire Norman that they name their daughter Stephen after her father, as she will be their only child. Squire Norman raises his daughter Stephen to be somewhat androgynous. His late wife's aunt, a spinster named Miss Laetitia Rowly, moves in to help take care of Stephen. From an early age, Stephen becomes dominant, assertive, and free-thinking.