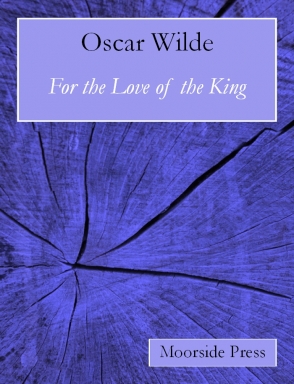 The very interesting and richly coloured masque or pantomimic play which is here printed in book form for the first time, was invented sometime in 1894 or possibly a little earlier.  It was written, not for publication, but as a personal gift to the author’s friend and friend of his family, Mrs. Chan Toon, and was sent to her with the letter that follows and explains its origin.

Mrs. Chan Toon, before her marriage to Mr. Chan Toon, a Burmese gentleman, nephew of the King of Burma and a barrister of the Middle Temple, was Miss Mabel Cosgrove, the daughter of Mr. Ernest Cosgrove of Lancaster Gate, a friend of Sir William and Lady Wilde, and herself brought up with Oscar and his brother Willie.

For a long while Mrs. Chan Toon, who after her husband’s death became Mrs. Woodhouse-Pearse, refused to permit the masque to be printed.  The late Robert Ross much wanted to include it in an edition of Wilde’s works, of which it now forms a part, but he could not obtain its owner’s consent.  An arrangement, however, having been completed, the play is now made public.

I am greatly repentant being so long in acknowledging receipt of “Told on the Pagoda.”  I enjoyed reading the stories, and much admired their quaint and delicate charm.  Burmah calls to me.

Under another cover I am sending you a fairy play entitled “For Love of the King,” just for your own amusement.  It is the outcome of long and luminous talks with your distinguished husband in the Temple and on the river, in the days when I was meditating writing a novel as beautiful and as intricate as a Persian praying-rug.  I hope that I have caught the atmosphere.

I should like to see it acted in your Garden House on some night when the sky is a sheet of violet and the stars like women’s eyes.  Alas, it is not likely.

I am in the throes of a new comedy.  I met a perfectly wonderful person the other day who unconsciously has irradiated my present with sinuous suggestion: a Swedish Baron, French in manner, Athenian in mind, and Oriental in morals.  His society is a series of revelations…

I was at Oakley Street on Thursday; my mother tells me she sends you a letter nearly every week.

Constance desires to be warmly remembered, while I, who am bathing my brow in the perfume of water-lilies, lay myself at the feet of you and yours.