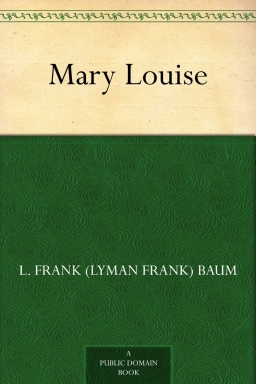 The Bluebird Books is a series of novels popular with teenage girls in the 1910s and 1920s. The series was begun by L. Frank Baum using his Edith Van Dyne pseudonym,then continued by at least three others, all using the same pseudonym. Baum wrote the first four books in the series, possibly with help from his son, Harry Neal Baum, on the third.

The books are concerned with adolescent girl detectives-a concept Baum had experimented with earlier, in The Daring Twins (1911) and Phoebe Daring (1912). The Bluebird series began with Mary Louise, originally written as a tribute to Baum's favorite sister, Mary Louise Baum Brewster. Baum's publisher, Reilly & Britton, rejected that manuscript, apparently judging the heroine too independent. Baum wrote a new version of the book; the original manuscript is lost.

The title character is Mary Louise Burrows. In the first books of the series, she is a fifteen-year-old girl with unusual maturity (though the other girls in her boarding school find her somewhat priggish). She is suddenly confronted with the fact that her beloved grandfather is suspected of no less a crime than treason against the United States. With the help of old and new friends of Mary Louise… the truth is uncovered. The novel features a federal agent named John O'Gorman; he is assisted by his daughter Josie, a young woman he has himself trained to function as an investigator. (The Josie O'Gorman character, despite preceding Nancy Drew by more than a decade, is much less traditionally feminine.)