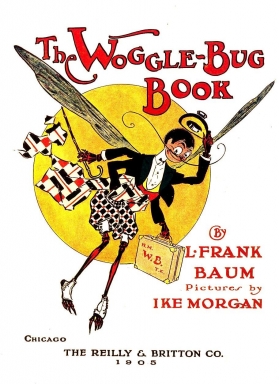 The Woggle-Bug Book is a 1905 children's book, written by L. Frank Baum, creator of the Land of Oz, and illustrated by Ike Morgan. It has long been one of the rarest items in the Baum bibliography. Baum's text has been controversial for its use of ethnic humor stereotypes.

The Woggle-Bug Book features the broad ethnic humor that was accepted and popular in its era, and which Baum employed in various works. The Woggle-Bug, who favors flashy clothes with bright colors (he dresses in "gorgeous reds and yellows and blues and greens" and carries a pink handkerchief), falls in love with a gaudy "Wagnerian plaid" dress that he sees on a mannequin in a department store window. Being a woggle bug, he has trouble differentiating between the dress and its wearers, wax or human. The dress is on sale for $7.93 ("GREATLY REDUCED" reads the tag). The Bug works for two days as a ditchdigger (he earns double pay since he digs with four hands) for money to buy the dress.

He arrives too late, though; the dress has been sold, and makes its way through the second-hand market. The Bug pursues his love through the town, ineptly courting the women (Irish, Swedish, and African-American, plus one Chinese man) who have the dress in turn. His pursuit eventually leads to an accidental balloon flight to Africa. There, menacing Arabs want to kill the Woggle-Bug, but he convinces them that his death would bring bad luck. In the jungle he falls in with the talking animals that are the hallmark of Baum's imaginative world.