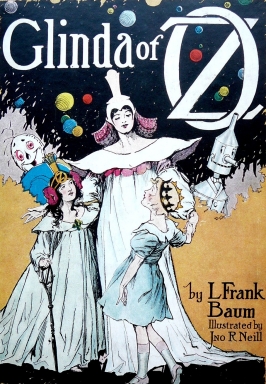 Legends That Every Child Should Know; a Selection of the Great Legends of All Times for Young People

Glinda of Oz: In Which Are Related the Exciting Experiences of Princess Ozma of Oz, and Dorothy, in Their Hazardous Journey to the Home of the Flatheads, and to the Magic Isle of the Skeezers, and How They Were Rescued from Dire Peril by the Sorcery of Glinda the Good is the fourteenth Land of Oz book written by children's author L. Frank Baum, published on July 10, 1920. It is the last book of the original Oz series, which was later continued by other authors. Like most of the Oz books, the plot features a journey through some of the remoter regions of Oz; though in this case the pattern is doubled: Dorothy and Ozma travel to stop a war between the Flatheads and Skeezers; then Glinda and a cohort of Dorothy's friends set out to rescue them.

Princess Ozma and Dorothy travel to an obscure corner of the Land of Oz, in order to prevent a war between two local powers, the Skeezers and the Flatheads. The leaders of the two tribes prove obstinate. Unable to prevent the war, Dorothy and Ozma find themselves imprisoned on the Skeezers' glass-covered island, which has been magically submerged to the bottom of its lake. Their situation worsens when the warlike queen Coo-ee-oh, who is holding them captive and who alone knows how to raise the island back to the surface of the lake, loses her battle and gets transformed into a swan, forgetting all her magic in the process. Ozma and Dorothy summon Glinda, who, with help from several magicians and magical assistants, must find a way to raise the island and liberate its trapped inhabitants.