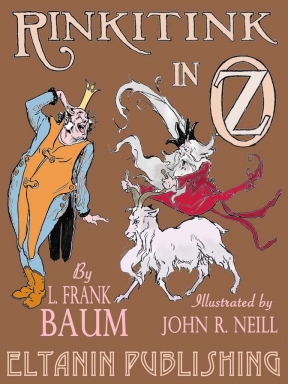 Rinkitink in Oz: Wherein is Recorded the Perilous Quest of Prince Inga of Pingaree and King Rinkitink in the Magical Isles that Lie Beyond the Borderland of Oz is the tenth book in the Land of Oz series written by L. Frank Baum. Published on June 20, 1916, with full-color and black-and-white illustrations by artist John R. Neill, it is significant that no one from Oz appears in the book until its climax; this is due to Baum having originally written most of the book as an original fantasy novel over ten years earlier, in 1905. Most of the action takes place on three islands — Pingaree, Regos, and Coregos — and within the Nome King's caverns. Since the original ruler of the nomes, Roquat — who later renamed himself Ruggedo, was deposed in 1914's Tik-Tok of Oz, Baum had to cleverly rework the tale to accommodate his successor, the well-intentioned—but politically motivated--Kaliko.

Pingaree is an island in the Nonestic Ocean that surrounds the fairy countries that encircle the Deadly Desert that surrounds the Land of Oz. Many years before this story begins, the armies of Regos and Coregos sought to invade Pingaree, but their advance was repelled by Pingaree's king with the help of three magic pearls given to him by the Mermaids. The Blue Pearl gave the kingsuperhuman strength, the Pink Pearl protected him from any form of harm, and the White Pearl provided words of wisdom that only he could hear. Buoyed by the Pearl's magic powers, the king of Pingaree led his people to victory and the invaders from Regos and Coregos drowned on the return trip.

At the beginning of Rinkitink in Oz King Kitticut and Queen Garee, the son and daughter-in-law of the victorious king are introduced. Their son Inga is coming of age to learn the secret of the pearls, and one day Kitticut reveals their secret hiding place to Inga. The next day, a royal visitor arrives at the island—King Rinkitink of Gilgad, a jovial and pleasantly plump fellow on royal holiday who remains on the island as Kitticut's guest for several weeks. Rinkitink's companion, other than the rowers from Gilgad, is a surly goatnamed Bilbil who seems to be Rinkitink's opposite in attitude.