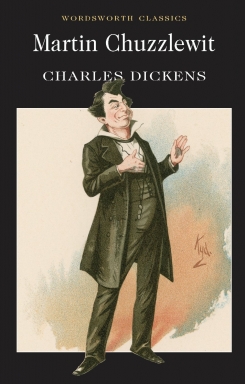 The Life and Adventures of Martin Chuzzlewit (commonly known as Martin Chuzzlewit) is a novel by Charles Dickens, considered the last of his picaresque novels. It was originally serialised in 1843 and 1844. Dickens thought it to be his best work, but it was one of his least popular novels. Like nearly all of Dickens' novels, Martin Chuzzlewit was released to the public in monthly instalments. Early sales of the monthly parts were disappointing, compared to previous works, so Dickens changed the plot to send the title character to America. This allowed the author to portray the United States (which he had visited in 1842) satirically as a near wilderness with pockets of civilisation filled with deceptive and self-promoting hucksters.

The main theme of the novel, according to a preface by Dickens, is selfishness, portrayed in a satirical fashion using all the members of the Chuzzlewit family. The novel is also notable for two of Dickens' great villains, Seth Pecksniff and Jonas Chuzzlewit. It is dedicated to Angela Georgina Burdett-Coutts, a friend of Dickens.

Martin Chuzzlewit has been raised by his grandfather and namesake. Years before, Martin senior took the precaution of raising an orphaned girl, Mary Graham. She is to be his nursemaid, with the understanding that she will be well cared for only as long as Martin senior lives. She thus has strong motivation to promote his well-being, in contrast to his relatives, who only want to inherit his money. However, his grandson Martin falls in love with Mary and wishes to marry her, ruining Martin senior's plans. When Martin refuses to give up the engagement, his grandfather disinherits him.

Martin becomes an apprentice to Seth Pecksniff, a greedy architect. Instead of teaching his students, he lives off their tuition fees and has them do draughting work that he passes off as his own. He has two spoiled daughters, nicknamed Cherry and Merry, having been christened as Charity and Mercy. Unbeknown to Martin, Pecksniff has actually taken him on to establish closer ties with the wealthy grandfather, thinking that this will gain Pecksniff a prominent place in the will.