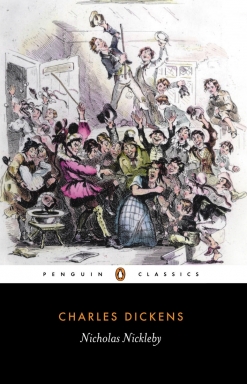 Nicholas Nickleby; or, The Life and Adventures of Nicholas Nickleby is a novel by Charles Dickens. Originally published as aserial from 1838 to 1839, it was Dickens' third novel.

The novel centres on the life and adventures of Nicholas Nickleby, a young man who must support his mother and sister after his father dies.

Nicholas Nickleby's father dies unexpectedly after losing all of his money in a poor investment. Nicholas, his mother and his younger sister, Kate, are forced to give up their comfortable lifestyle in Devonshire and travel to London to seek the aid of their only relative, Nicholas's uncle Ralph Nickleby. Ralph, a cold and ruthless businessman, has no desire to help his destitute relations and hates Nicholas, who reminds him of his dead brother, on sight. He gets Nicholas a low-paying job as an assistant to Wackford Squeers, who runs the school Dotheboys Hall in Yorkshire. Nicholas is initially wary of Squeers (a very unpleasant man with one eye) because he is gruff and violent towards his young charges, but he tries to quell his suspicions. As Nicholas boards the stagecoach for Greta Bridge, he is handed a letter by Ralph's clerk, Newman Noggs. A once-wealthy businessman, Noggs lost his fortune, became a drunk and had no other recourse but to seek employment with Ralph, whom he loathes. The letter expresses concern for the innocent young man and offers assistance if Nicholas ever requires it. Once he arrives in Yorkshire, Nicholas comes to realise that Squeers is running a scam: he takes in unwanted children (most of whom are illegitimate, crippled or deformed) for a high fee, and starves and mistreats his charges while using the money sent by their parents to pad his own pockets. Squeers and his monstrous wife whip and beat the children regularly while spoiling their own son rotten. While he is there, Nicholas befriends a simple boy named Smike, who is older than the other “students” and now acts as an unpaid servant. Nicholas attracts the attention of Fanny Squeers, his employer's plain and shrewish daughter, who deludes herself into thinking that Nicholas is in love with her. She attempts to disclose her affections during a game of cards, but Nicholas doesn't catch her meaning. Instead he ends up flirting with her friend Tilda Price, to the consternation of both Fanny and Tilda's friendly but crude-mannered fiancé John Browdie. After being accosted by Fanny again, Nicholas bluntly tells her he does not return her affections and wishes to be free of the horrible atmosphere of Dotheboys Hall, earning her enmity.