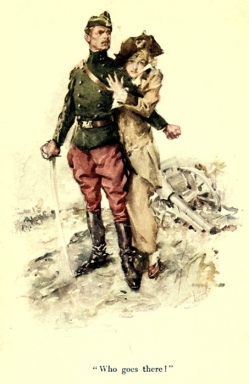 The Crown Prince is partly right; the majority in the world is against him and what he stands for; but not against Germany and the Germans.

He professes surprise at the attitude of the United States. That attitude is the natural result of various causes among which are the following:

Distrust of any aggressor by a nation inclined toward peace.

Disgust at the "scrap of paper" episode.

Resentment at the invasion of Belgium.

Contempt for the Imperial Government which is industriously screwing the last penny of "indemnity" out of a ruined nation, which the people of the United States are taxing their private means to keep from starvation.

Further back there are other reasons.

For thirty years the press of Germany has seldom missed an opportunity to express its contempt for Americans. Any American who has ever lived in Germany or who has read German newspapers during the last thirty years is aware of the tone of the German press concerning America and Americans. No innuendoes have been too vulgar, no sneers too brutal for the editors of these papers, and, presumably for the readers.

Also Americans do not forget the attitude of the Imperial Government during the Spanish war. The bad manners of a German Admiral are bearing fruit.

Imperialism we Americans do not understand, but it need not make us unfriendly to empires.

But we do understand when manners are bad, or when a military caste, which maintains its traditions of personal honour by violence, becomes arrogant to the point of brutality.

A false notion of personal honour is alone enough to prevent a sympathetic understanding between two peoples.

America is not an enemy to Germany, only is it inexorably opposed to any Government which breaks faith; and which enthrones above all other gods the god of violence.

For the German soldiers who are dying in this Hohenzollern-Hapsburg war we have only sympathy and pity. We know they are as brave as any soldiers; that cruelty in the German Army is in no greater proportion than it is in any army.

But also we know that the cause of Imperial Germany is wrong; her civilization is founded on propositions impossible for any American to accept; her aims, ambitions, and ideals antagonistic to the progress to communal and individual liberty as we understand the terms. And that settles the matter for us.