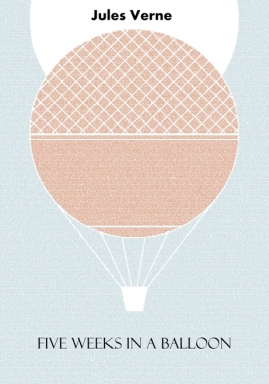 Five Weeks in a Balloon, or, Journeys and Discoveries in Africa by Three Englishmen (French: Cinq semaines en ballon) is anadventure novel by Jules Verne.

It is the first Verne novel in which he perfected the "ingredients" of his later work, skillfully mixing a plot full of adventure and twists that hold the reader's interest with passages of technical, geographic, and historic description. The book gives readers a glimpse of the exploration of Africa, which was still not completely known to Europeans of the time, with explorers traveling all over the continent in search of its secrets.

Public interest in fanciful tales of African exploration was at its height, and the book was an instant hit; it made Verne financially independent and got him a contract with Jules Hetzel's publishing house, which put out several dozen more works of his for over forty years afterward.

A scholar and explorer, Dr. Samuel Fergusson, accompanied by his manservant Joe and his friend professional hunter Richard "Dick" Kennedy, sets out to travel across the African continent — still not fully explored — with the help of a balloon filled withhydrogen. He has invented a mechanism that, by eliminating the need to release gas or throw ballast overboard to control his altitude, allows very long trips to be taken. This voyage is meant to link together the voyages of Sir Richard Burton and John Hanning Speke in East Africa with those of Heinrich Barth in the regions of the Sahara and Chad. The trip begins in Zanzibar on the east coast, and passes across Lake Victoria, Lake Chad, Agadez, Timbuktu, Djenné and Ségou to St Louis in modern day Senegal on the west coast. The book describes the unknown interior of Africa near modern day Central African Republic as a desert, when it is actually savanna.