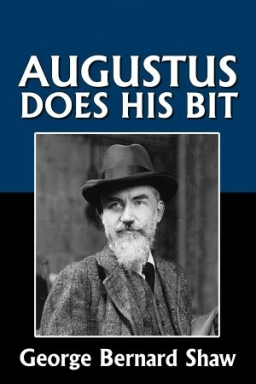 Augustus Does His Bit, A True to Life Farce (1916) is a comic one-act play by George Bernard Shaw about a dim-witted aristocrat who is outwitted by a female spy during World War I.

In the small town of Little Pifflington, Lord Augustus Highcastle tells his secretary Horatio Beamish that the war is a very serious matter, especially as he has three German brothers-in-law. He soon learns that a female spy is after an important document in his possession. A glamorous woman visits him. After flattering him by saying how important he is, she tells him that she suspects her sister-in-law of being the spy. She explains that Augustus' brother, known as "Blueloo", has made a bet that Augustus can be easily tricked, and intends to use this woman to prove it. If she can get the document, a list of British gun emplacements, and take it to "Blueloo", Augustus's incompetence will be exposed.

Beamish enters holding the document, which Augustus had left on a coffee table in the hotel. The lady manages to switch the document for a fake one and leaves. Having secured the document before witnesses, she returns to telephone the War Office. She tells "Blueloo" that she easily outwitted Lord Augustus. Augustus then realises that she was the spy and the document he has is a fake.