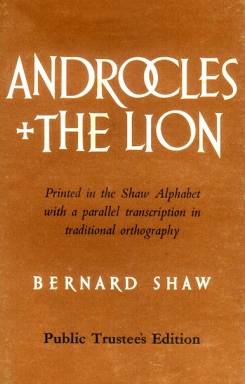 Androcles and the Lion is a 1912 play written by George Bernard Shaw. The play is Shaw's retelling of the tale of Androcles, a slave who is saved by the requited mercy of a lion. In the play, Shaw portrays Androcles to be one of the many Christians being led to the Colosseum for torture. Characters in the play exemplify several themes and takes on both modern and supposed early Christianity, including cultural clash between Jesus' teachings and traditional Roman values.

Androcles, a fugitive Christian tailor, accompanied by his nagging wife, is on the run from his Roman persecutors. While hiding in the forest he comes upon a wild lion who approaches him with a wounded paw. His wife runs off. Androcles sees that the cause of the animal's distress is a large thorn embedded in its paw, which he draws out while soothing the lion in baby language.

Androcles is captured and is sent to the Colosseum to be executed with other Christians in gladiatorial combat. They are joined by a new Christian convert called Ferrovius, who struggles to reconcile his Christian principles with his violent inclinations. The Roman captain guarding them is attracted to the genteel convert Lavinia. Eventually the Christians are sent into the arena, but Ferrovius kills all the gladiators before they can harm any Christians. He is offered a job in the Praetorian Guard, which he takes. The Christians are to be released, but the crowd demands blood. To satisfy them, Androcles offers himself to be savaged by lions. But the lion that is supposed to kill him turns out to be the one that Androcles saved, and the two dance around the arena to the delight of the crowd. The emperor comes into the arena to get a closer look, and the lion attacks him. Androcles calls him off and the emperor is saved. He then declares an end to the persecution of Christians. Androcles and his new 'pet' depart together.