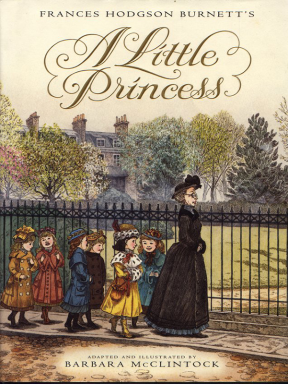 A Little Princess is a 1905 children's novel by Frances Hodgson Burnett. It is a revised and expanded version of Burnett's 1888 serialised novel entitled Sara Crewe: or, What Happened at Miss Minchin's, which was published in St. Nicholas Magazine. According to Burnett, she had been composing a play based on the story when she found out a lot of characters she had missed. The publisher asked her to publish a new, revised story of the novella, producing the novel.

Based on a 2007 online poll, the National Education Association named the book one of its "Teachers' Top 100 Books for Children." It was one of the "Top 100 Chapter Books" of all time in a 2012 poll by School Library Journal.

A Little Princess opens with seven-year-old Sara Crewe and her father, Captain Crewe, arriving at Miss Minchin's boarding school for girls in London. Captain Crewe is very wealthy and states that Sara is destined for a lavish, comfortable future. Despite being pampered all her life in India, Sara herself is very intelligent, polite, and creative. Headmistress Miss Minchin is secretly jealous and dislikes Sara for her cleverness, but openly praises and flatters her because of her father's wealth. Before departing for India, Captain Crewe purchases Sara an elegant wardrobe and a doll whom Sara adores and names "Emily." Sara's friendliness and love for pretending and storytelling makes her popular with most of the school's students. They soon begin regarding her as a princess, which she embraces. Sara befriends Ermengarde, the school dunce; Lottie, a spoiled four-year-old student; and Becky, the cockney scullery maid.