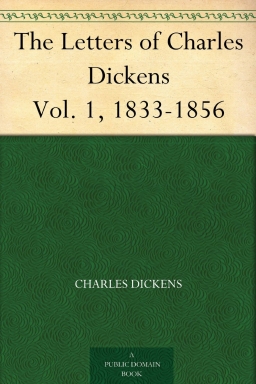 We intend this Collection of Letters to be a Supplement to the "Life of Charles Dickens," by John Forster. That work, perfect and exhaustive as a biography, is only incomplete as regards correspondence; the scheme of the book having made it impossible to include in its space any letters, or hardly any, besides those addressed to Mr. Forster. As no man ever expressed himself more in his letters than Charles Dickens, we believe that in publishing this careful selection from his general correspondence we shall be supplying a want which has been universally felt.

Our request for the loan of letters was so promptly and fully responded to, that we have been provided with more than sufficient material for our work. By arranging the letters in chronological order, we find that they very frequently explain themselves and form a narrative of the events of each year. Our collection dates from 1833, the commencement of Charles Dickens's literary life, just before the starting of the Pickwick Papers, and is carried on up to the day before his death, in 1870.

We find some difficulty in being quite accurate in the arrangements of letters up to the end of 1839, for he had a careless habit in those days about dating his letters, very frequently putting only the day of the week on which he wrote, curiously in contrast with the habit of his later life, when his dates were always of the very fullest.

A blank is made in Charles Dickens's correspondence with his family by the absence of any letter addressed to his daughter Kate (Mrs. Perugini), to her great regret and to ours. In 1873, her furniture and other possessions were stored in the warehouse of the Pantechnicon at the time of the great fire there. All her property was destroyed, and, among other things, a box of papers which included her letters from her father.

It was our intention as well as our desire to have thanked, individually, every one-both living friends and representatives of dead ones-for their readiness to give us every possible help to make our work complete. But the number of such friends, besides correspondents hitherto unknown, who have volunteered contributions of letters, make it impossible in our space to do otherwise than to express, collectively, our earnest and heartfelt thanks.

A separate word of gratitude, however, must be given by us to Mr. Wilkie Collins for the invaluable help which we have received from his great knowledge and experience, in the technical part of our work, and for the deep interest which he has shown from the beginning, in our undertaking.

It is a great pleasure to us to have the name of Henry Fielding Dickens associated with this book. To him, for the very important assistance he has given in making our Index, we return our loving thanks.

In writing our explanatory notes we have, we hope, left nothing out which in any way requires explanation from us. But we have purposely made them as short as possible; our great desire being to give to the public another book from Charles Dickens's own hands-as it were, a portrait of himself by himself.

Those letters which need no explanation-and of those we have many-we give without a word from us.

In publishing the more private letters, we do so with the view of showing him in his homely, domestic life-of showing how in the midst of his own constant and arduous work, no household matter was considered too trivial to claim his care and attention. He would take as much pains about the hanging of a picture, the choosing of furniture, the superintending any little improvement in the house, as he would about the more serious business of his life; thus carrying out to the very letter his favourite motto of "What is worth doing at all is worth doing well."