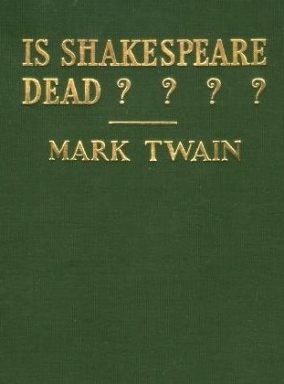 Is Shakespeare Dead? is a short, semi-autobiographical work by American humorist Mark Twain. It explores the controversy over the authorship of the Shakespearean literary canon via satire, anecdote, and extensive quotation of contemporary authors on the subject.

The original publication spans only 150 pages, and the formatting leaves roughly half of each page blank. The spine is thread bound. It was published in April 1909 by Harper & Brothers, twelve months before Mark Twain's death.

The book attracted controversy for incorporating a chapter from The Shakespeare Problem Restated by George Greenwood without permission or proper credit, an oversight Twain blamed on the accidental omission of a footnote by the printer.

In the book, Twain expounds the view that Shakespeare of Stratford was not the author of the canon, and lends tentative support to the Baconian theory. The book opens with a scene from his early adulthood, where he was trained to be a steamboat pilot by an elder who often argued with him over the controversy.

Twain's arguments include the following points:

That little was known about Shakespeare's life, and the bulk of his biographies were based on conjecture.

That a number of eminent British barristers and judges found Shakespeare's plays permeated with precise legal thought, and that the author could only have been a veteran legal professional.

That in contrast, Shakespeare of Stratford had never held a legal position or office, and had only been in court over petty lawsuits late in life.
That small towns lionize and celebrate their famous authors for generations, but this had not happened in Shakespeare's case. He described his own fame in Hannibal as a case in point.

Twain draws parallels and analogies from the pretensions of modern religious figures and commentators on the nature of Satan. He compares the believers in Shakespeare to adherents of Arthur Orton and Mary Baker Eddy.