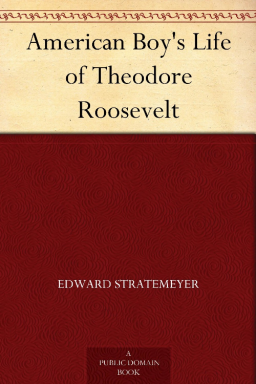 The life of Theodore Roosevelt is one well worth studying by any American boy who wishes to make something of himself and mount high on the ladder of success.

The twenty-sixth President of our country is a fine type of the true American of to-day, full of vim and vigor, quick to comprehend, and equally quick to act, not afraid to defend his opinions against all comers when satisfied that he is in the right, independent, and yet not lacking in fine social qualities, physically and morally courageous, and with a faith in himself and his God that is bound to make for good so long as he clings to it.

Theodore Roosevelt comes from countless generations of fighting stock, both in this country and abroad. And yet as a youth the future hero of San Juan Hill was a delicate lad, and many fears were entertained that he might not live to manhood. But life in the open air, with judicious athletic exercise, accomplished wonders, and he became strong and hardy to an astonishing degree.

The boyhood days of the future President were spent in New York City and at the family's country home, Oyster Bay, Long Island. From there he went to Harvard College, from which he graduated with high honors. Still somewhat delicate in health, he travelled in Europe, studied for a short time at Dresden, and took to climbing the Alps and other noted mountains.

His mind had gravitated toward literature, and he was writing a naval history of the War of 1812 when something prompted him to take up politics, and almost before he knew it he was elected a New York State assemblyman. He served in this capacity for three terms, and many are the stories told of how he fought against corruption first, last, and all the time.

The death of his first wife and of his beloved mother were at this time a great blow to him, and leaving his one little daughter with relatives, he struck out for the great West, where, in the Bad Lands, so called, he located as ranchman and hunter, filling in his spare hours by studying and by writing on various outdoor subjects, works which have become decidedly popular, and which show well his gifts as an author and as an observer of nature.

While still in great part a successful ranchman, he ran for mayor of New York and was defeated. He now devoted himself with increased energy to his literary labors until, soon after, he was appointed by President Harrison a member of the Civil Service Commission. He served on this commission with marked ability for six years, when he resigned to become police commissioner of New York City.

Theodore Roosevelt's work as a police commissioner will not be readily forgotten. The whole tone of the service was at once raised, and for the first time in many years the metropolis had "dry" Sundays, when every saloon in the city was tightly closed. This strict compliance with the law made him some enemies, but to these he paid no heed, for he was doing only his duty.

When William McKinley was nominated for the Presidency the first time, Theodore Roosevelt was one of his most enthusiastic supporters. Upon the election of McKinley, John D. Long was appointed Secretary of the Navy and Theodore Roosevelt became the First Assistant Secretary. Ever since writing his naval history the newly appointed assistant had made a close study of naval matters, and now he applied himself with vigor to the duties of his office; and it was primarily through his efforts that when the war with Spain came, our war-ships and our coast defences were in much better condition than they had been at any time previous in our history.

With the outbreak of the war, Theodore Roosevelt resigned. "My duty here is done," he said. "My place is in the field." And without loss of time he and his intimate friend, Dr. Leonard Wood, began the organization of that body of troops which was officially designated as the First United States Volunteer Cavalry, but which speedily became known everywhere as the Rough Riders,--a body as unique as the world has ever seen, being made up of men from all over the Union, but principally from four Territories, and including hunters, cowboys, soldiers of fortune, foot-ball and base-ball champions, college graduates, ex-policemen, with American, Irish, Dutch, German, Mexican, and Indian blood in their veins,--truly a remarkable collection, but every man and officer strong and hardy, full of courage, a good horseman, and a fine shot.

From the very start, the Rough Riders were anxious to get into the fight, and the opportunity was not long in coming. From Florida the command was transported to Daiquiri, on the southern coast of Cuba, and then began the advance upon the city of Santiago, which brought on the engagement at La Guasima, followed by the thrilling battle of San Juan Hill, in which the Rough Riders distinguished themselves in a manner that will never be forgotten. In the very thickest of this fight was Colonel Roosevelt, urging his men forward to victory, regardless of the shot and shell falling upon all sides. A hero truly, and such heroes are not forgotten.

Upon the close of the war Theodore Roosevelt thought to retire to private life, but this was not to be. Arriving at New York, he was hailed with delight by thousands, and at the next election was made governor of the Empire State. As governor he made friends in both of the leading political parties by his straightforwardness and his sterling honesty. Men might differ with him politically, but they could never accuse him of doing that which he himself did not firmly believe was right.

His term as governor had not yet expired when President McKinley was nominated for a second term. Again the people at large clamored for Roosevelt, and against his earnest protestations he was forced to accept the nomination for the Vice-Presidency. He was elected, and at the proper time took his seat as presiding officer of the Senate.

It was at this time a blow fell upon our nation from which we have scarcely yet recovered. President McKinley was struck down by the cowardly hand of an assassin. The Vice-President was at this time off on one of his favorite outings, but with all possible speed he came back and was sworn in as President. It was a great responsibility, and many feared that great changes in our government might result. But the fears proved groundless. Young as he was,--and he is the youngest of all of our Presidents,--he took upon himself the duty of carrying out the intentions of his predecessor, and proving to the world once again that, even though a President die, "the government at Washington still lives."

There is another side to the character of our President which must not be overlooked. He is of strong religious convictions and a member of the Dutch Reformed Church. It is seldom that he is given to preaching, but when he does his words have a sincerity that proves much for the foundation of his character. He stands for what is honest and upright in political and private life, and although, being but human, he may make mistakes, he remains a Chief Magistrate well deserving the highest honors our nation can bestow.