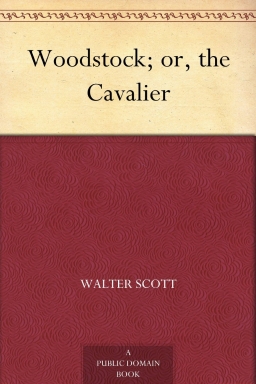 Woodstock, or The Cavalier. A Tale of the Year Sixteen Hundred and Fifty-one (1826) is a historical novel by Walter Scott. Set just after the English Civil War, it was inspired by the legend of the Good Devil of Woodstock, which in 1649 supposedly tormented parliamentary commissioners who had taken possession of a royal residence at Woodstock, Oxfordshire. The story deals with the escape of Charles II in 1652, during the Commonwealth, and his final triumphant entry into London on 29 May 1660.

At a thanksgiving service in Woodstock church for the victory at Worcester (3 September 1651), the Rev. Nehemiah Holdenough was compelled to cede the pulpit, which he had usurped from the late rector (Dr Rochecliffe), to Joseph Tomkins, who, in military attire, declaimed against monarchy and prelacy, and announced the sequestration of the royal lodge and park by Cromwell and his followers. Proceeding thither, he encountered Sir Henry Lee, accompanied by his daughter Alice, prepared to surrender his charge, and was conducted through the principal apartments by the forester Joliffe, who managed to send his sweetheart Phoebe and dog Bevis with some provisions to his hut, in which the knight and his daughter had arranged to sleep. On arriving there they found Colonel Everard, a Roundhead who had come to offer them his own and his father's protection; but Sir Henry abused and spurned his nephew as a rebel, and at Alice's entreaty he bade them farewell, as he feared, for ever. On his way to the lodge he met his Royalist friend, Captain Wildrake, whom he was sheltering in spite of his politics, and determined to send him with an appeal to Cromwell to reinstate his uncle at Woodstock. On reaching Windsor, the captain, disguised as a Roundhead, obtained an interview with Oliver Cromwell, and a compliance with Everard's request, on condition that he would aid in securing the murdered king's son, in the event of his seeking refuge with the Lees.