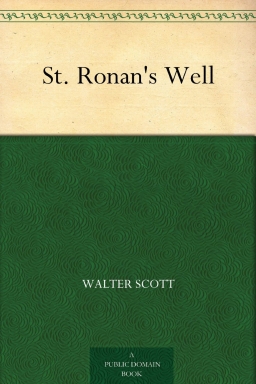 Saint Ronan's Well is a novel by Sir Walter Scott. It is the only novel he wrote with a 19th-century setting.

Valentine Bulmer and his half-brother Francis Tyrrel had been Mrs Dods' guests at Cleikum Inn when they were students from Edinburgh, and she gladly welcomed Francis when he arrived, some years afterwards, to stay at the inn again, to fish and sketch in the neighbourhood. A mineral spring had in the meantime been discovered at Saint Ronan’s, and he was invited by the fashionable visitors to dine with them at the Fox Hotel, where he quarrelled with an English baronet named Sir Bingo Binks. On his way back to the Cleikum, he met Clara Mowbray, to whom he had been secretly engaged during his former visit; he had been prevented from marrying her by the treachery of Bulmer, who had now succeeded to the earldom, and was expected at the spa. Tyrrel was visited by Captain MacTurk, and accepted a challenge from the baronet, but failed to keep his appointment, and was posted as an adventurer by the committee of management. He also disappeared from the inn, leading his hostess to consult Mr Bindloose, the sheriff's clerk, under the belief that he had been murdered. A Mr Touchwood came to change a bill, and talked of having been abroad for many years. He showed great interest in the affairs of the Mowbray family, and, having taken up his quarters at the Cleikum, made friends with Rev Mr Cargill, who had been disappointed in love, and startled him with a rumour that Clara was about to be married.

Soon after the earl's arrival, it was reported that he had been shot in the arm by a foot-pad; and, while his wound was healing, he spent his time gambling with John Mowbray, the young laird of St Ronan's, who had borrowed his sister Clara's money to try to improve his luck. Having allowed him to win a considerable sum, his lordship made proposals for Clara's hand, explaining that his grand-uncle had disinherited his only son, and devised his estate to him, on condition that he chose as a wife a lady of the name of Mowbray. In a letter to his friend Jekyl, the earl confessed that he had been winged in a duel with Tyrrel, whom he met on his way to fight Sir Bingo, and that he had also wounded Tyrrel. A few days afterwards the company at the Well assembled at Shaw's Castle to take part in a play, and Mr Touchwood persuaded Rev Mr Cargill to accompany him. While they were walking in the grounds the minister reminded Clara of a secret in his keeping, which made it impossible for her to marry. He also encountered the earl, and, believing him to be Bulmer, attempted to warn him.