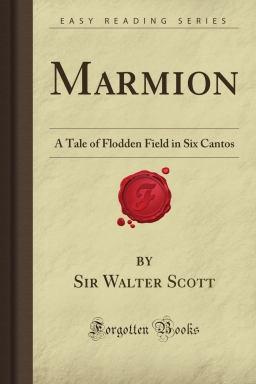 Marmion is an epic poem by Walter Scott about the Battle of Flodden (1513). It was published in 1808.

Scott started writing Marmion, his second major work, in November 1806. When Archibald Constable, the publisher, learnt of this, he offered a thousand guineas for the copyright unseen. William Miller and John Murray each agreed to take a 25% share in the project. Murray observed: "We both view it as honourable, profitable, and glorious to be concerned in the publication of a new poem by Walter Scott." Scott later said that he thoroughly enjoyed writing the work. He told his son-in-law, Lockhart, "Oh, man, I had many a grand gallop among these braes when I was thinking of Marmion."

In 1807 Scott practised manoeuvres with the Light Horse Volunteers (formed to defend an invasion from France) in order to polish his description of Flodden. Marmion was finished on January 22 and published on 22 February 1808 in a quarto first edition of two thousand copies. This edition, priced one and a half guineas, sold out in a month. It was followed by twelve octavo editions between 1808 and 1825.