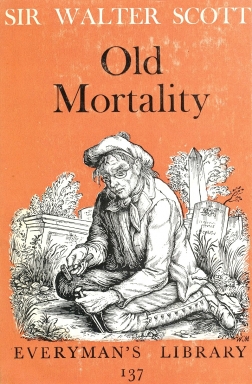 Old Mortality is a novel by Sir Walter Scott set in the period 1679–89 in south west Scotland. It forms, along with The Black Dwarf, the 1st series of Scott's Tales of My Landlord. The two novels were published together in 1816. Old Mortality is considered one of Scott's best novels.

It was originally titled The Tale of Old Mortality, but is generally shortened in most references.

After an Introduction to the Tales of My Landlord, supposedly written by the novel's (fictional) editor Jedediah Cleishbotham, an introduction by the author describes Robert Paterson, a Scotsman of the 18th century, who late in life decided to travel around Scotland re-engraving the tombs of 17th century Covenanter martyrs, and who Scott met at Dunottar. In the first chapter of the novel Cleishbotham describes at length meeting Paterson, hearing his anecdotes, and finding other stories of the events to present an unbiased picture.

The novel then describes a wapenshaw held in 1679 by Lady Margaret Bellenden, life-rentrix of the barony of Tillietudlem. This was a show of her support for the Royalist cause, but most of her tenants favoured the opposing Covenanters (who wanted the re-establishment of presbyterianism in Scotland) and she has to enlist her unwilling servants. After her supporters are duly mustered, the main sport is a shoot at the popinjay in which the Cavalier favourite is narrowly defeated by Henry Morton, son of a Covenanter. He is introduced to Lady Margaret and her lovely granddaughter Edith Bellenden.