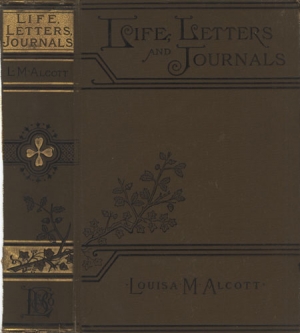 LOUISA MAY ALCOTT is universally recognized as the greatest and most popular story-teller for children in her generation. She has known the way to the hearts of young people, not only in her own class, or even country, but in every condition of life, and in many foreign lands. Plato says, "Beware of those who teach fables to children;" and it is impossible to estimate the influence which the popular writer of fiction has over the audience he wins to listen to his tales. The preacher, the teacher, the didactic writer find their audience in hours of strength, with critical faculties all alive, to question their propositions and refute their arguments. The novelist comes to us in the intervals of recreation and relaxation, and by his seductive powers of imagination and sentiment takes possession of the fancy and the heart before judgment and reason are aroused to defend the citadel. It well becomes us, then, who would iv guard young minds from subtle temptations, to study the character of those works which charm and delight the children.

Of no author can it be more truly said than of Louisa Alcott that her works are a revelation of herself. She rarely sought for the material of her stories in old chronicles, or foreign adventures. Her capital was her own life and experiences and those of others directly about her; and her own well-remembered girlish frolics and fancies were sure to find responsive enjoyment in the minds of other girls.

It is therefore impossible to understand Miss Alcott's works fully without a knowledge of her own life and experiences. By inheritance and education she had rich and peculiar gifts; and her life was one of rare advantages, as well as of trying difficulties. Herself of the most true and frank nature, she has given us the opportunity of knowing her without disguise; and it is thus that I shall try to portray her, showing what influences acted upon her through life, and how faithfully and fully she performed whatever duties circumstances laid upon her. Fortunately I can let her speak mainly for herself.

Miss Alcott revised her journals at different times during her later life, striking out what was too personal for other eyes than her own, and destroying a great deal which would doubtless have proved very interesting. v

The small number of letters given will undoubtedly be a disappointment. Miss Alcott wished to have most of her letters destroyed, and her sister respected her wishes. She was not a voluminous correspondent; she did not encourage many intimacies, and she seldom wrote letters except to her family, unless in reference to some purpose she had strongly at heart. Writing was her constant occupation, and she was not tempted to indulge in it as a recreation. Her letters are brief, and strictly to the point, but always characteristic in feeling and expression; and, even at the risk of the repetition of matter contained in her journals or her books, I shall give copious extracts from such as have come into my hands.