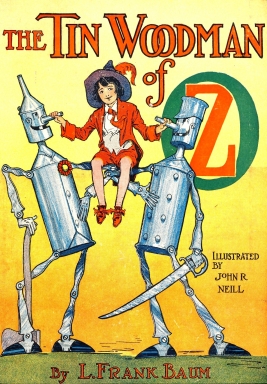 The Tin Woodman of Oz: A Faithful Story of the Astonishing Adventure Undertaken by the Tin Woodman, Assisted by Woot the Wanderer, the Scarecrow of Oz, and Polychrome, the Rainbow's Daughter is the twelfth Land of Oz book written by L. Frank Baum and was originally published on May 13, 1918. The Tin Woodman is unexpectedly reunited with his Munchkinsweetheart Nimmie Amee from the days when he was flesh and blood. This was a back-story from The Wonderful Wizard of Oz.

The book was dedicated to the author's grandson Frank Alden Baum.

The Tin Woodman and the Scarecrow are regaling each other with tales at the Woodman's palace in the Winkie Country when a Gillikin boy named Woot wanders in. After he is fed and rested, Woot asks the Woodman how he came made of tin.

He relates how the Wicked Witch of the East enchanted his axe and caused him to chop his body parts off limb by limb, because he was in love with her ward, Nimmie Amee. Each chopped limb was replaced by the tinsmith Ku-Klip with a counterpart made of tin. (Since Oz is a fairyland, no one can die, even when the parts of their body are separated from each other.) Without a heart, the Tin Woodman felt he could no longer love Nimmie Amee and he left her. Dorothy and the Scarecrow found him after he had rusted in the forest (an event related in The Wonderful Wizard of Oz) and went with him to the Emerald City where the Wizard gave him a heart. Woot suggests that the heart may have made him kind, but it did not make him loving, or he would have returned to Nimmie Amee. This shames the Tin Woodman and inspires him to journey to the Munchkin Country and find her.