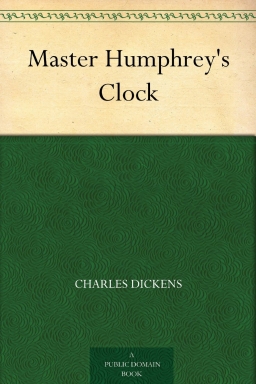 Master Humphrey's Clock was a weekly periodical edited and written entirely by Charles Dickens and published from April 4, 1840 to December 4, 1841. It began with a frame story in which Master Humphrey tells about himself and his small circle of friends (which includes Mr. Pickwick), and their penchant for telling stories. Several short stories were included, followed by the novels The Old Curiosity Shop and Barnaby Rudge. It is generally thought that Dickens originally intended The Old Curiosity Shop as a short story like the others that had appeared in Master Humphrey's Clock, but after a few chapters decided to extend it into a novel. Master Humphrey appears as the first-person narrator in the first three chapters of The Old Curiosity Shop but then disappears, stating, "And now that I have carried this history so far in my own character and introduced these personages to the reader, I shall for the convenience of the narrative detach myself from its further course, and leave those who have prominent and necessary parts in it to speak and act for themselves."

Master Humphrey is a lonely man who lives in London. He keeps old manuscripts in an antique longcase clock by the chimney-corner. One day, he decides that he would start a little club, called Master Humphrey's Clock, where the members would read out their manuscripts to the others. The members include Master Humphrey; a deaf gentleman, Jack Redburn; retired merchant Owen Miles; and Mr. Pickwick from The Pickwick Papers. A mirror club in the kitchen, Mr. Weller's Watch, run by Mr. Weller, has members including Humphrey's maid, the barber and Sam Weller.

In the portion of Master Humphrey's Clock which succeeds The Old Curiosity Shop, Master Humphrey reveals to his friends that he is in fact the character referred to as the 'single gentleman' in that story.