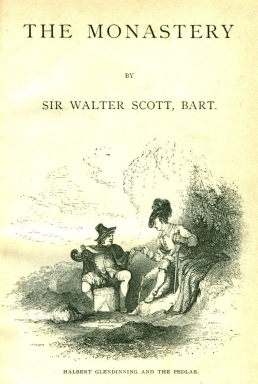 The Monastery: a Romance (1820) is a historical novel by Sir Walter Scott. Along with The Abbot, it is one of Scott's Tales from Benedictine Sources and is set in the time of Mary, Queen of Scots, and the Elizabethan period.

In the many conflicts between England and Scotland the property of the Church had hitherto always been respected; but her temporal possessions, as well as her spiritual influence, were now in serious danger from the spread of the doctrines of the Reformation, and the occupants of the monasteries were dependent on the military services of their tenants and vassals for protection against the forays of Protestant barons and other heretical marauders. Dame Elspeth's husband Simon had fallen in the battle of Pinkie (1547), and the hospitality of her lonely tower had been sought by the widow of the Baron of Avenel and her daughter Mary, whose mansion had been seized and plundered by invaders, and subsequently taken possession of by her brother-in-law Julian. While confessing the baroness on her death-bed, Father Philip discovered that she possessed a Bible, and as he was carrying it to the Lord Abbot, it was, he declared, taken from him by a spectral White Lady, a character resembling the Undine, which Scott borrowed from Friedrich de la Motte Fouqué's Undine. Disbelieving the sacristan's tale, the sub-prior visited the tower, where he met Christie of the Clinthill, a freebooter, charged with an insolent message from Julian Avenel, and learnt that the Bible had been mysteriously returned to its owner. Having exchanged it for a missal, he was unhorsed on his return by the apparition; and, on reaching the monastery, the book had disappeared from his bosom, and he found the freebooter detained in custody on suspicion of having killed him. The White Lady was next seen by Elspeth's son Halbert, who was conducted by her to a fairy grotto, where he was allowed to snatch the Bible from a flaming altar.