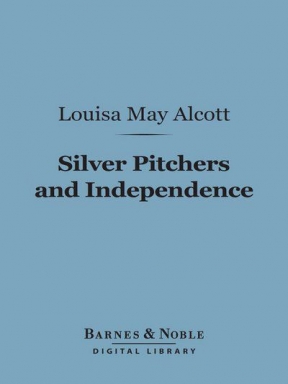 "We can do nothing about it except show our displeasure in some proper manner," said Portia, in her most dignified tone.

"I should like to cut them all dead for a year to come; and I'm not sure that I won't!" cried Pauline, fiercely.

"We ought to make it impossible for such a thing to happen again, and I think we might," added Priscilla, so decidedly that the others looked at her in surprise.

The three friends sat by the fire "talking things over," as girls love to do. Pretty creatures, all of them, as they nestled together on the lounge in dressing-gowns and slippers, with unbound hair, eyes still bright with excitement, and tongues that still wagged briskly.

Usually the chat was of dresses, compliments, and all the little adventures that befall gay girls at a merry-making. But to-night something of uncommon interest absorbed the three, and kept them talking earnestly long after they should have been asleep.

Handsome Portia looked out from her blonde locks with a disgusted expression, as she sipped the chocolate thoughtful mamma had left inside the fender. Rosy-faced Pauline sat staring indignantly at the fire; while in gentle Priscilla's soft eyes the shadow of a real sorrow seemed to mingle with the light of a strong determination.

Yes, something had happened at this Thanksgiving festival which much offended the three friends, and demanded grave consideration on their part; for the "Sweet P's," as Portia, Pris, and Polly were called, were the belles of the town. One ruled by right of beauty and position, one by the power of a character so sweet and strong that its influence was widely felt, and one by the wit and winsomeness of a high yet generous spirit.

It had been an unusually pleasant evening, for after the quilting bee in the afternoon good Squire Allen had given a bountiful supper, and all the young folks of the town had joined in the old-fashioned games, which made the roof ring with hearty merriment.

All would have gone well if some one had not privately introduced something stronger than the cider provided by the Squire,—a mysterious and potent something, which caused several of the young men to betray that they were decidedly the worse for their libations.

That was serious enough; but the crowning iniquity was the putting of brandy into the coffee, which it was considered decorous for the young girls to prefer instead of cider.

Who the reprobates were remained a dead secret, for the young men laughed off the dreadful deed as a joke, and the Squire apologized in the handsomest manner.

But the girls felt much aggrieved and would not be appeased, though the elders indulgently said, "Young men will be young men," even while they shook their heads over the pranks played and the nonsense spoken under the influence of the wine that had been so slyly drank.

Now what should be done about it? The "Sweet P's" knew that their mates would look to them for guidance at this crisis, for they were the leaders in all things. So they must decide on some line of conduct for all to adopt, as the best way of showing their disapproval of such practical jokes.