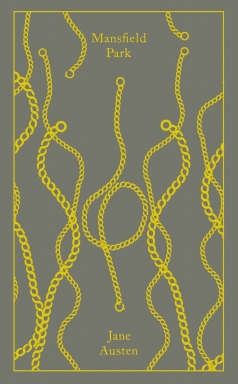 Mansfield Park is the third novel by Jane Austen, written at Chawton Cottage between February 1811 and 1813. It was published in May 1814 by Thomas Egerton, who published Jane Austen's two earlier novels, Sense and Sensibility and Pride and Prejudice. When the novel reached a second edition in 1816, its publication was taken over by John Murray, who also published its successor, Emma. Mansfield Park is a pygmalion morality epic.

The events of the story are put in motion by the marriages of three sisters. Lady Bertram married extremely well to the wealthy baronet Sir Thomas Bertram, while Mrs. Norris married a clergyman, who was given the living at the local parsonage by Sir Thomas; this allows the Norrises to live comfortably, yet far below the opulence of the Bertrams. The third sister, Mrs. Price, married a naval lieutenant who was shortly afterwards wounded in battle and left with a meager pension, scarcely enough to support their eventual household of nine children. Mrs. Norris, always wishing to appear virtuous, proposes that Lady Bertram take one of the children to live with her at Mansfield Park. They choose the eldest daughter Fanny Price, who is the protagonist of the novel. Thus, at age 10, Fanny is sent to live with her wealthy relatives at Mansfield Park.

Fanny's new life is not as she might wish. Her energetic Aunt Norris, who strongly advocated the plan of bringing Fanny when it was first proposed, becomes less interested as time goes on and does little to assist with Fanny's care, except to frequently point out the bother and expense Fanny causes. Aunt Norris refuses to allow a fire to be set in Fanny's room, though Fanny is in poor health.

At Mansfield Park, Fanny grows up with her four older cousins, Tom (17), Edmund (16), Maria (13), and Julia (12), but is always treated as an unwanted poor relation. Only Edmund shows real kindness. He is also the most good-natured of the siblings: Maria and Julia are vain and spoiled, while Tom is an irresponsible gambler. Over time, Fanny's gratitude for Edmund's thoughtfulness secretly grows into romantic love. Lady Bertram is of a lazy and indolent temperament and rarely does anything to assist the raising or monitoring of the children, while all of the children are in awe of Sir Thomas. Mrs. Norris showers attention and affection on her Bertram nieces, particularly Maria, enjoying the prestige and wealth associated with them, but is verbally abusive and mean-spirited toward Fanny, whom she sees as beneath the others. She tries to exclude Fanny from outings and other pleasures.