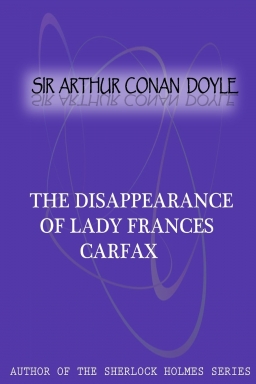 The Disappearance of Lady Frances Carfax is one of the 56 Sherlock Holmes short stories written by British author Sir Arthur Conan Doyle. It is one of the eight stories in the cycle collected as His Last Bow, and one of the few stories in which for much of the plot Watson must act alone and try his best with Holmes left in the background.

Holmes sends Dr. Watson to Lausanne to investigate Lady Frances Carfax’s disappearance. Holmes is too busy in London. Lady Frances is a lone, unwed woman denied a rich inheritance on account of her sex. She does, however, carry valuable jewels with her. It is also her habit to write to her old governess, Miss Dobney, every other week, but for the past five weeks, there has not been a word from her. She has left the Hôtel National for parts unknown. Her last two bank transactions were cheques, one to pay her hotel bill, and another for £50 to her maid, Miss Marie Devine.

In Switzerland, Watson finds out that Lady Frances stayed at the Hôtel International for several weeks, but then suddenly left in a hurry one day. Only one witness could suggest an explanation, one involving a big, bearded man who kept hounding her. It also emerges that Lady Frances’s maid has left her employ, although it is not known why.

Watson finds out where Lady Frances went, and inquires at the Englischer Hof in Baden, Germany. She stayed there for a fortnight and met a couple named Schlessinger, amissionary from South America, and an invalid. Lady Frances left with them three weeks ago for London, and nothing has been heard of her since. Watson also finds out that the big bearded man, the “savage”, came about a week ago looking for her. Watson telegraphs Holmes about his progress, and oddly, Holmes wires back asking for a description of Dr. Schlessinger’s left ear. Watson believes this to be Holmes’s attempt at humour. Holmes is actually in earnest.

Watson visits Marie Devine, the former maid, in Montpellier, France, and it turns out that her upcoming wedding was why she left Lady Frances’s employ. The £50 was a wedding present. She, too, believes that the bearded man was the reason that her former mistress left Lausanne. He was quite a rough man. During this interview, Marie sees the very man in question in the street. Watson rushes out and demands to know who he is and what he has done with Lady Frances. A fight ensues and Watson is nearly strangled. A French workman breaks the fight up with his cudgel and the bearded man withdraws. It then turns out that the workman is a disguised Holmes, who suggests that Watson accompany him back to London, and wryly observes that there is no blunder which Watson has failed to commit in this investigation.