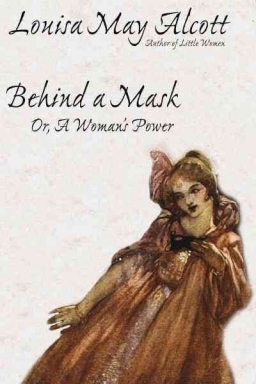 Behind A Mask, Or A Woman's Power is a novella written by American author Louisa May Alcott. The novella was originally published in 1866 under the pseudonym of A. M. Barnard in The Flag of Our Union. Set in Victorian era Britain, the story follows Jean Muir, the deceitful governess of the wealthy Coventry family. With expert manipulation, Jean Muir obtains the love, respect, and eventually the fortune of the Coventry family.

Since it was republished by Madeleine B. Stern in 1975, the novel has become important in critical reinterpretation of Alcott's corpus of works and literary importance. Many literary critics treat the novel; for example, one critic treated the novel as a version of the "Beauty and the Beast" trope, while others provide feminist critiques of the narrative. Alcott's treatment of themes like acting, social class, and the struggle for agency all inform these larger discussions by critics.

Set in the Coventry Mansion during the Victorian era, the wealthy family hires a young woman named Jean Muir to be the governess of sixteen-year-old Bella. When she first meets the Coventry family, Jean succeeds in charming Bella, Ned and Mrs. Coventry by having a fainting spell. However, Gerald and Lucia, son of the estate and cousin to the Coventry family, remain suspicious. They are skeptical with good reason, for when Jean retires to her own bedroom, she removes her costume (a wig and some fake teeth) to reveal that she is actually an actress of at least thirty years of age.

Acting the part of a harmless governess, Jean slowly but surely weasels her way into the hearts of the Coventry family. Eventually, all the male characters fall in love with her: first Ned, the youngest, followed by the skeptic Gerald, and gradually the unassuming uncle, John. She uses the love they bestow upon her to turn them against each other and eventually to secure the Coventry estate for herself. By the end of the story, Jean Muir has married John to become Lady Coventry.