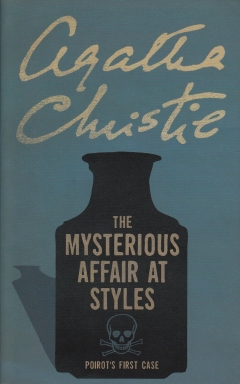 The Mysterious Affair at Styles is a detective novel by Agatha Christie. It was written in the middle of World War I, in 1916, and first published by John Lane in the United States in October 1920 and in the United Kingdom by The Bodley Head (John Lane's UK company) on 21 January 1921. The US edition retailed at US$2.00 and the UK edition at seven shillings and sixpence(7/6).

Styles was Christie's first published novel, introducing Hercule Poirot, Inspector (later, Chief Inspector) Japp, and Arthur Hastings. Poirot, a Belgian refugee of the Great War, is settling in England near the home of Emily Inglethorp, who helped him to his new life. His friend Hastings arrives as a guest at her home. When the woman is killed, Poirot uses his detective skills to solve the mystery. This is also the setting of Curtain, Poirot's last case.

The book includes maps of the house, the murder scene, and a drawing of a fragment of a will.

The story opens in England during World War I at Styles Court, an Essex country manor. Upon her husband's death, the wealthy widow, Emily Cavendish, inherited a life estate in Styles as well as the outright inheritance of the larger part of the late Mr. Cavendish's income. Mrs. Cavendish became Mrs. Inglethorp upon her recent marriage to a younger man, Alfred Inglethorp. Emily's two stepsons, John and Lawrence Cavendish, John's wife Mary and Cynthia Murdoch, also live at Styles. John Cavendish is the vested remainderman of Styles; that is, the property will pass to him upon his stepmother's death, per his late father's will. Lawrence Cavendish would also come into a considerable sum of money. The income left to Mrs Inglethorp by her late husband would be distributed according to her will, which she changes at least once per year. If she has not changed her will since her marriage, her husband will inherit that income. Cynthia does war-time work at the pharmacy in the nearby hospital.

The residents of Styles wake to find Emily Inglethorp dying of strychnine poisoning. Hastings, a house guest, enlists the help of his friend Hercule Poirot, who is staying in the nearby village, Styles St. Mary. Poirot pieces together events surrounding the murder. On the day she was killed, Emily Inglethorp was overheard arguing with someone, either her husband Alfred or her stepson John. Afterwards, she seemed quite distressed and, apparently, made a new will-which no one can find. She ate little at dinner and retired early to her room with her document case. The case was later forced open by someone and a document removed. Alfred Inglethorp left Styles earlier in the evening and stayed overnight in the nearby village, so was not present when the poisoning occurred. Nobody can explain how or when the strychnine was administered to Mrs. Inglethorp.