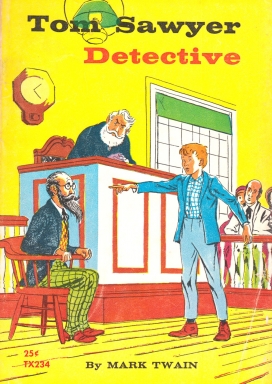 In 1909, Danish schoolmaster Valdemar Thoresen claimed, in an article in the magazine Maaneds, that the plot of the book had been plagiarized from Steen Blicher's story The Vicar of Weilby. Blicher's work had been translated into German, but not into English, and Twain's secretary wrote Mr. Thoresen a letter, stating, "Mr. Clemens is not familiar with Danish and does not read German fluently, and has not read the book you mention, nor any translation or adaptation of it that he is aware of. The matter constituting 'Tom Sawyer, Detective,' is original with Mr. Clemens, who has never been consciously a plagiarist."

To Be Read at Dusk