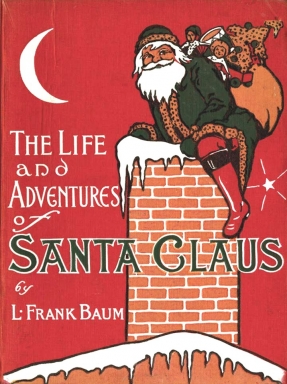 The Life and Adventures of Santa Claus is a 1902 children's book, written by L. Frank Baum and illustrated by Mary Cowles Clark.

Santa Claus, as a baby is found in the Forest of Burzee by Ak, the Master Woodsman of the World, and placed in the care of the lioness Shiegra. The Wood Nymph, Necile, breaks the law of the forest and takes the baby because she desires to raise a child of her own as mortals do, convincing Ak that since he made the law, he can allow an exception, and agrees to have both Necile and Shiegra care for the baby. Necile calls him Claus, meaning "little one" in the old Burzee language, but Queen Zurline gives him the more formal name Neclaus, "Necile's Little One" (According to a footnote "Nicholas" is an erroneous name based on common convention). He is educated by the immortals of the Forest, including:

Upon reaching young adulthood, Ak decides it is time for Claus to see how other mortals live. He sees war, brutality, poverty, child neglect and child abuse and is frustrated by mortals' very existence. Ak encourages him not to shy away from the mortals, because he is one, and must learn to live among them, as he cannot reside in Burzee as an adult. He settles in the nearby Laughing Valley of Hohaho, where the immortals regularly visit and assist him, and Necile gives him a little cat named Blinky.