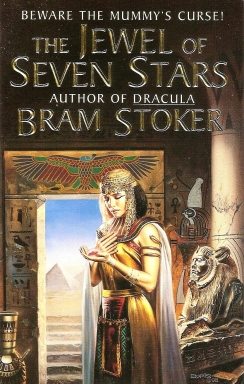 The Jewel of Seven Stars is a 1903 horror novel by Bram Stoker. The story is a first-person narrative of a young man pulled into anarchaeologist's plot to revive Queen Tera, an ancient Egyptian mummy. The novel explores common fin-de-siecle themes such asimperialism, the rise of the New Woman and feminism, and societal progress.

Malcolm Ross, a young barrister, is awakened in the middle of the night and summoned to the house of famous Egyptologist Abel Trelawny at the request of his daughter, Margaret, with whom Malcolm is enamored. Once Malcolm arrives at the house, he meets Margaret, Superintendent Dolan, and Doctor Winchester, and learns why he has been called: Margaret, hearing strange noises from her father’s bedroom, woke to find him unconscious and bloodied on the floor of his room, under some sort of trance. Margaret reveals that her father had left a letter of strange instructions in the event of his incapacitation, stating that his body should not be removed from his room and must be watched at all times until he wakes up. The room is filled with Egyptian relics, and Malcolm notices that the "mummy smell" has an effect on those in the room. A large mummy cat in the room disturbs Margaret’s cat, Silvio, and the doctor suspects Silvio is guilty of the scratch marks on Trelawny’s arm.

On the first night of watch, Malcolm awakens to find Trelawny again on the floor, bloody and senseless. Margaret asks Dr. Winchester to summon another expert, and he calls for Dr. James Frere, a brain specialist. However, when Frere demands that Trelawny be moved from his room, Margaret refuses and sends him away. After a normal night with no attacks, a stranger arrives, begging to see Trelawny. He reveals himself to be Eugene Corbeck, an Egyptologist who was working with Trelawny. He has returned from Egypt with lamps that Trelawny requested, but finds upon his arrival at the house that the lamps have disappeared. The next day, Malcolm and Margaret admire Trelawny’s Egyptian treasures, noting in particular a large sarcophagus, a coffer covered with hieroglyphics, and an oddly well-preserved mummy hand with seven fingers. Malcolm then finds the missing lamps in Margaret’s bedroom. Concerned for Margaret, Malcolm tells Corbeck everything that has happened up until his arrival, and Corbeck gives Malcolm a mysterious book to read. The book tells the story of Nicholas van Huyn, a Dutch explorer who travelled to the Valley of the Sorcerer to explore the tomb of a mysterious Egyptian queen, Tera. In the tomb, he finds a sarcophagus and a mummy hand with seven fingers, adorned with a ruby ring with seven points that look like stars.