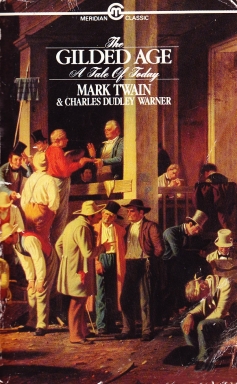 The Gilded Age: A Tale of Today is an 1873 novel by Mark Twain and Charles Dudley Warner that satirizes greed and political corruption in post-Civil War America in the era now referred to as the Gilded Age. Although not one of Twain's best-known works, it has appeared in more than one hundred editions since its original publication. Twain and Warner originally had planned to issue the novel with illustrations by Thomas Nast. The book is remarkable for two reasons–it is the only novel Twain wrote with a collaborator, and its title very quickly became synonymous with graft, materialism, and corruption in public life.

The term gilded age, commonly given to the era, comes from the title of this book. Twain and Warner got the name from Shakespeare's King John (1595): "To gild refined gold, to paint the lily... is wasteful and ridiculous excess." Gilding gold, which is already beautiful and not in need of further adornment, is excessive and wasteful, characteristics of the age Twain and Warner wrote about in their novel. Another interpretation of the title, of course, is the contrast between an ideal "Golden Age," and a less worthy "Gilded Age," as gilding is only a thin layer of gold over baser metal, so the title now takes on a pejorative meaning as to the novel's time, events and people.

The novel concerns the efforts of a poor rural Tennessee family to grow affluent by selling the 75,000 acres (300 km2) of unimproved land acquired by their patriarch, Silas “Si” Hawkins, in a timely manner. After several adventures in Tennessee, the family fails to sell the land and Si Hawkins dies. The rest of the Hawkins story line focuses on their beautiful adopted daughter, Laura. In the early 1870s, she travels to Washington, D.C. to become a lobbyist. With a Senator's help, she enters Society and attempts to persuade Congressmen to require the federal government to purchase the land.

A parallel story written by Warner concerns two young upperclass men, Philip Sterling and Henry Brierly, who seek their fortunes in land in a novel way. They make a journey with a group intent on surveying land in Tennessee in order to acquire it for speculation. Philip is good-natured but plodding. He is in love with Ruth Bolton, an aspiring physician andfeminist. Henry is a born salesman, charming but superficial.

The theme of the novel is that the lust for getting rich through land speculation pervades society, illustrated by the Hawkinses as well as Ruth's well-educated father, who nevertheless cannot resist becoming enmeshed in self-evidently dubious money-making schemes.

The Poems and Verses of Charles Dickens